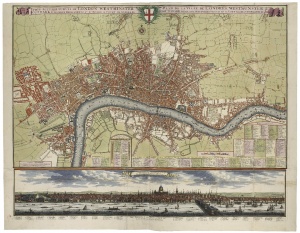 Open City: London, 1500–1700, one of the Exhibitions at the Folger, opened June 5, 2012 and closed on September 30, 2012. The exhibition celebrates London with an in-depth look at the city's early modern past, a time of fire, plague, and religious schisms, as well as international commerce, explosive population growth, and a bubbling mix of new ideas.

Open City: London, 1500–1700 explores how wide-ranging changes in the sixteenth and seventeenth centuries translated into Londoners' daily lives and familiar gathering places, from churches and marketplaces to public theaters. Filled with rare maps, books, prints, plays, deeds, diaries, and more, the exhibition explores what life was like in a capital city with some surprising similarities to our own.

This exhibition was curated by Kathleen Lynch with Betsy Walsh as consultant.

Kathleen Lynch is Executive Director of the Folger Institute, a position she has held since 1996. As such, she is responsible for organizing the seminars, workshops, and other formal programs for scholars at the Folger Shakespeare Library. Her research interests include the intertwined histories of regulations of religion and the book trade. Among her published articles are “Into Jail and into Print: John Bunyan Writes the Godly Self” in the Huntington Library Quarterly’s special issue on Prison Writing, edited by William H. Sherman and William J. Sheils (2009); “Staging New Worlds: Place and Le Theatre de Neptune” in the Journal of Medieval and Early Modern Studies (2008); and “Devotion Bound: A Social History of The Temple,” in Books and Readers in Early Modern England, Ed. Jennifer Andersen and Elizabeth Sauer (University of Pennsylvania Press, 2001). Her book, Protestant Autobiography in the Seventeenth-Century Anglophone World, was recently published with Oxford University Press (2012).

Elizabeth (Betsy) Walsh joined the Folger Library staff in 1974 and was appointed Head of Reader Services in 1986. She has been a contributor to Shakespeare Magazine and was co-editor with Thomas Gravell of American Watermarks, 1690–1835 (Oak Knoll Press, 2002). She has served as a curator and consultant for a number of Folger exhibitions including The Reader Revealed (2001), Voices for Tolerance (2004) and Breaking News (2008).

"People are thinking about London this summer with the queen's 60th anniversary and the Olympics," says Kathleen Lynch, curator of Open City: London, 1500–1700. "We wanted to give them a glimpse of London in the summer of 1608, let's say, or the summer of 1666." During the two centuries covered by the exhibition, she says, the city went through "incredible growth and change," transforming from a small medieval capital to a sprawling, early modern metropolis. "But that's not really the focus; that's the context."

For Lynch, the "focus," and the fascination, is how individual Londoners experienced the big events of their day. For example, Henry VIII's dissolution of monasteries and other religious properties triggered "huge real estate changes, urban growth and renewal," she says. But on a very local level, exhibition visitors can see the impact more concretely in an otherwise routine lease of three tenements and a wharf by St. Margaret's Parish. In looking at the lease, "what struck me was the date, 1537," Lynch says—and the note on the back: "These three leases are in question to be new made according to the words of the corporation of King Henry the VIII." Essentially, she says, the note is asking, "Do you think the new law will have an effect here? Can we still lease this? Do we still own it?"

Such glimpses of London's history on a local scale are made possible, Lynch says, by the vast Folger collection, which supplied almost all of the rare manuscripts, books, prints, and other works on display, some of them never before displayed. Exhibition consultant Betsy Walsh, agrees. "We could only have done this for London" as an individual city, she says. "The depth of the collection made this uniquely possible." Walsh also points out the personal quality of manuscript journals and eyewitness accounts by travelers and Londoners alike—including a day-by-day account of the Great Fire, recast into verse, by 17-year-old Samuel Wiseman.

The collection is especially rich in records of the rapidly evolving Blackfriars district, a former Dominican monastery along the Thames that was soon put to new uses. "There are hundreds of documents," Lynch says. "Account books, memoranda, and more." Visitors may already know of the Blackfriars Theater owned by the Burbages, who were also shareholders in the Globe Theater, "but there was a lot more going on. People were renting townhouses there. Shakespeare bought a Blackfriars townhouse as an investment—we have the deed in the exhibition. The Office of the Revels stored materials in a Blackfriars warehouse. Schoolboys performed in a choir."

Setting such local records in context are a wealth of maps, panoramas, and other images of the city from the Folger collection, including one of Lynch's favorite pieces in the exhibition: the "Long View" of London by the engraver Wenceslaus Hollar. "It's spectacular," says Lynch, "an amazingly large, long series of six engraved panels. This is the first view of London that's elaborated with gestures toward grandeur: cherubs in the sky, monumental figures at the sides, including a goddess of the earth and a god of the sea, a Latin dedicatory poem—all quite new "for an image of the city." Another exciting thing is that he drew sketches from the tower of a church in Southwark [Southwark Cathedral] that is still there."

Not surprisingly, the library's collection also includes many plays of the period, offering yet another perspective on the city. "So many of the plays are a commentary on the life of London," Lynch says. "Plays are not independent or unrelated to daily life; theater is part of the marketplace, a commercial story. And the plays comment on new developments, new ideas, and new products, too." Among the plays in the exhibition, Ben Jonson's Bartholomew Fair (1614) depicts the uproarious annual fair at the city's outskirts, she notes, while Thomas Middleton's A Chaste Maid in Cheapside (1630) offers a glimpse of London's Cheapside community—as does a hand-drawn, contemporaneous image of the Cheapside market.

"It's all interwoven," Lynch says of these and other glimpses of London's past. "All connected. It's getting us to think about place, what difference a place makes, how people at a local level engaged with major historical events—and the consequences of things having happened in a particular time and place."

Between 1500 and 1700, London grew from the capital of England with a population of 50,000 to the seat of an emerging empire with a population nearing 500,000. At the beginning of this period, most of London’s population lived within the medieval walls. By the end, only a minority did. However, at no point did the boundaries of the incorporated city contain the vitality of the metropolitan area. Therefore, Open City takes an expansive view of London, with all of its overlapping and competing authorities, and its influx and exchange of ideas, products, habits, and beliefs that characterize city life. Open City looks to three everyday gathering places where people mixed for business, leisure, and worship.

Church: The state religion of England switched from Catholicism to Protestantism (and back and forth). But the idea that there should be a state church remained, until eventually the religious controversies that disrupted parish communities made way for certain limited principles and practices of religious freedom in London and elsewhere.

Theatre: Commercial theaters were a new phenomenon in late sixteenth-century London. The public playhouses brought together people from up and down the social scale. The plays also moved up and down the scale of forms of entertainment, from popular to elite. They brought to life scenes from the faraway world, the affairs of state, and London’s own teeming streets.

Market: Diverging interests within trade companies were changing London’s markets. At the same time, international trade opened those markets to new competitions and products from around the world.

Examining the many and often contested activities within church, theater, and market, Open City: London 1500-1700 juxtaposes the changing ways in which Londoners formed communities, negotiated social relations, and understood their places in the world.

Visit this map of London to find the locations of, and learn fun facts about landmark sites from early modern London—many of which are still around today.

Immerse yourself in early modern London with podcasts on St. Paul's Cathedral, from its Anglo-Saxon roots to its magnificant reconstruction after the Great Fire of 1666; the lively district of Blackfriars, home to artists, actors, and aristocrats; and the opening lecture on the exhibition Open City: London, 1500–1700 by curator Kathleen Lynch.

Hear John Schofield discuss the history of this landmark building from its Anglo-Saxon origins to its magnificent reconstruction after the Great Fire of London in 1666 or read the transcript.

Blackfriars: "The Most Convenient Place"

Ralph Alan Cohen shares what made the lively London precinct of Blackfriars—home to actors, artists, and aristocrats—the place to be in early modern London. Read the transcript or listen to the audio.

Ralph Alan Cohen, Director of Mission and Co-Founder of the American Shakespeare Center, directed the building of the ASC's replica of the Blackfriars Playhouse in Staunton, Virginia.

The Experience of Early Modern London

Listen to author and scholar Deborah Harkness as she considers what it would have felt like to move around and through early modern London. Relying on the writings of Isabella Whitney, Hugh Plat, and John Stow, Harkness makes these native Londoners her—and our—tour guides.

Deborah Harkness is a prize-winning historian and novelist and a professor of history at the University of Southern California in Los Angeles. She is the author of The Jewel House: Elizabethan London and the Scientific Revolution and the popular All Souls Trilogy, which includes A Discovery of Witches and Shadow of Night.

London transformed from a medieval city to the beginnings of a modern metropolis between the years 1500 and 1700. Learn more about the city of Henry VIII, Shakespeare, and Queen Elizabeth I in this series of short video clips.

Get an overview of 200 years of history in less than 5 minutes, as London grew from a medieval city and underwent plagues, fires, religious upheaval, and other changes before gaining global prominence as the capital of the emerging British Empire!

Londoner John Stow captured a rapidly disappearing London in his book, Survey of London. This text is an invaluable source of information on London during the Tudor period, which curator Kathleen Lynch explains in this video.

Social standing played an important role in many aspects of daily life in the 16th and 17th centuries, including where one sat in church. Learn more from Kenneth Fincham.

Ever wonder how the Royal Exchange in London got its name? Learn more from Linda Levy Peck in this video clip.

The Globe Theatre in London is famous as the site where many of Shakespeare's plays were (and are) performed. Learn more about this landmark from Michael Witmore in this short video.

Theater became a popular form of entertainment in London during the Restoration period, and the Cockpit Theatre was one of many venues that re-opened during the reign of Charles II. Richard Schoch shares more in this video.

Religious sects proliferated in 17th-century England, leading clergyman Thomas Edwards to compare them to gangrene in his book, Gangraena. Learn more from David Como in this video.

This Annotated bibliography of readings related to Open City: London, 1500–1700 includes print and web resources. It is not meant to be comprehensive, but is meant to lead the interested reader to some of the many resources in the area early modern London.