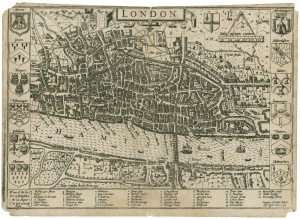 This article collects the children's exhibition material featured in Open City: London, 1500–1700, one of the Exhibitions at the Folger.

London, England changed a lot in 200 years between 1500 and 1700. During that time, it grew from a walled, medieval city into the capital of an international empire.

London was home to famous kings and queens like Henry VIII and Elizabeth I. It was home to playwrights, including William Shakespeare, Christopher Marlowe, and Aphra Behn. People from all over the world began to make London their home, and it was a busy, dirty, exciting, and sometimes dangerous place to live.

Immigration, or people moving into the city, was one of the main reasons that London's population kept growing. Some people came from other European countries, like France or Holland, while others arrived London from much farther away—Africa, Asia, the Middle East, or the "New World" in what is now North and South America.

Many people moved to London from other parts of England as well. Often they came looking for better jobs and ways to make more money. With all of these new people coming into the city from different parts of the world, London was a busy and exciting place to live.

It could also be dangerous. With so many people living closely together, disease was a major problem. Plague, a type of sickness that caused fevers, swelling, seizures, and sometimes death, killed many people in the city during these two centuries. 1665 was a particularly bad year, during which time the "Great Plague of London" was responsible for nearly 70,000 deaths.

Despite this tragedy, London continued to grow, and by 1700, it was one of the largest and most important cities in the world.

Early in the morning of September 2, 1666, a terrible fire broke out in London. Becase the city's streets were narrow and houses were built close together, the fire spread easily. Within hours, the fire had moved through several neighborhoods.

By the time it was extinguished several days later, nearly 100,000 people were homeless. The fire had destroyed houses, shops, and churches, as well as major city landmarks. London Bridge was partially burnt down, and so was St. Paul's cathedral, the city's largest church.

After the fire, people were angry and wanted to find someone to blame. The British government launched an investigation, and eventually a French winemaker named Robert Hubert confessed to starting the fire. Although most of the judges did not think Hubert was guilty, he was convicted and sentenced to death. For many years, the true cause of the fire—a bakery in Pudding Lane—was overlooked.

In the decades following the Great Fire, Londoners focused on new houses, churches, and business to replace the old ones. Within 25 years, most of what had been lost in the fire had been rebuilt. One of the biggest projects was rebuilding St. Paul's Cathedral. The famous architect Sir Christopher Wren was chosen for the job. You can still see St. Paul's Cathedral today, designed as Christopher Wren imagined it over 300 years ago.

Shopping became an important part of life in London in the 16th and 17th centuries. The Royal Exchange was the city first "mall." It opened in 1569, and was the first building of its kind in London by having many types of shops all together in one place.

In addition to products made in England, the Royal Exchange also contained goods from other parts of the world. Merchants and traders gathered here to exchange information, make business arrangements, and buy and sell products.

London had other markets as well. Cheapside was the city's first large open-air market. At Smithfield, livestock including cattle and sheep were sold, and at Bartholomew Fair, people came from all over England, and eventually from all over Europe, to buy cloth during this 3-day fair that happened every year from 1133 to 1855.

While people in England were busy shopping, English explorers set out to find new trades routes. On their travels, they discovered new products, and these items eventually were brought to England to be bought and sold. These included tea from China, rice, gold, and ivory from Africa, chocolate from South America, and fish and lumber from North America.

Did you know? Queen Elizabeth I visited the new shopping area when it opened and liked it so much that she gave permission for it to be called "The Royal Exchange"!

For more on shopping at this time take A Trip to the First Mall.

Going to the theater was a very popular form of entertainment in London. Rich and poor, old and young, male and female people from all kinds of backgrounds and all walks of life went to see plays.

Theaters could hold between a few hundred to several thousand people. Many theaters were built in Southwarke, or the area just outside of London south of the river Thames. Some theaters were made from buildings that used to be a part of monasteries or churches; after Henry VIII closed many of England's monasteries, the empty buildings were made into theaters. The Blackfriars Theatre founded by actor James Burbage was one theater that used to be a part of a London monastery.

Although women went to the theater as members of the audience, there were no professional actresses in England until the 1660s. Margaret Hughes and Nell Gwynn became some of England's first actresses, and two of the most famous.

Can you find the Globe Theatre in this map of London?