This article - conceived and written by Barbara J. Bono, Maria S. Horne, and Michelle Markey Butler - is associated with the Folger Institute's 2016-2017 year-long colloquium on Teaching Medieval Drama and Performance, which welcomed advanced scholars whose research and pedagogical practice explore historical, literary, and theoretical dimensions of medieval drama from the perspective of performance.

This is, of course, a statement true of all works in the dramatic genre. However, it is especially true of medieval drama, which frequently addressed in embodied form large and ultimate questions about humanity's place in creation and the scheme of history, and did so in direct and explicit relation to its audiences, with extraordinary emotive and affective range from the obscene to the exalted. 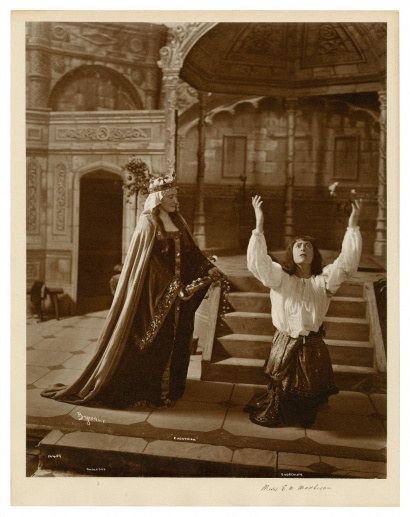 Miss Edith Wynne Matthison in the role of Everyman (c. 1902)

Medieval drama is integrated into the curriculum for theatre majors at most universities in the United States. However, there, rather than being part of acting technique or performance-based courses, or of staged productions, the subject is most often studied only very briefly in lecture courses like Theatre History. Meanwhile, in departments of literature, medieval drama is sometimes included as a topic in a broader medieval or British literature class or as a minor prequel to the drama of Shakespeare and his contemporaries, but it is seldom given much time or attention, and its performative nature is largely neglected.

But we would argue that medieval drama is accessible, exciting, adaptable, and inspirational to interested communities of all ages and abilities - from lower grade levels to highly-trained practitioners - for drama itself is the ideal synesthetic and interdisciplinary vehicle for community formation and differential learning. There is also contemporaneity in medieval drama: humor, music, and fun, as well as metaphor, allegories, and subtexts which speak to who we are today. And while the task of accessing this excitement may seem daunting, in this article we have put together a set of resources - combining language, action, and spectacle - to get you started.

The first step in bridging the gap between performance and literary study is alerting students and teachers to the new wealth of readily-available textual and general scholarly resources for these plays, which reach far beyond the frequently anthologized Everyman or the de-contextualized bit of a biblical cycle play.

The second step is to make at least a beginning at "putting the plays up on their feet." To that end we have supplied a series of ten performance-based Lesson Plans which build up from the rich relationship of word and thing, to considering the symbolic shape of an action, to preliminary training toward full performance and modern adaptation. While these Lesson Plans are designed as a sequence to support extended work, they may also be sampled and adapted strategically for shorter teaching units. Suitable for all kinds of students from the novice to the budding professional, they follow the format of the famous Folger Shakespeare Set Free teaching manuals, namely "What's On for Today and Why?," "What to Do?," and How'd It Go?" They offer some suggestions for how to capture the vitality of medieval drama in short time and limited space, and build on some of the best continuing scholarship in the field. They imply, as well, an on-going engagement in the developing interdisciplinary field of Performance Studies, which combines interest in the performing arts and literary theory with the fields of anthropology and sociology.

In the Biblical account that underwrites medieval drama, God gave man the power of naming, and thus united words and things. But in the world we inhabit today, words are frequently separated from actions, and we are shy or disempowered, and read privately or do not know how to connect our words with what we do. 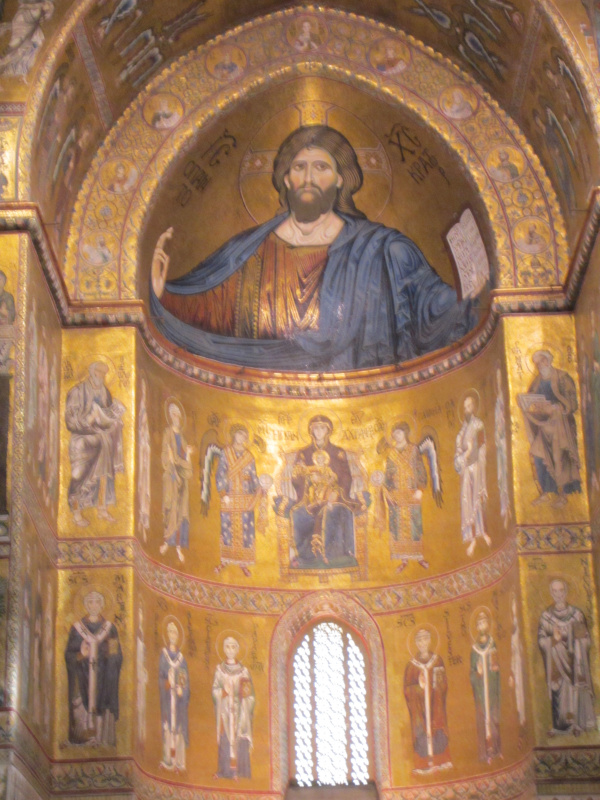 In order to move toward a fully embodied understanding and performance of the speaking picture that is medieval drama it can be helpful initially to separate its forceful but often seemingly unfamiliar language from its physical embodiment as images and things, to detach these words and things at first from their plots so as to familiarize them through defamiliarization before reintegrating them as performance. Put simply, novice actors can speak, enjoy, and come to understand some words and phrases, or appreciate a concrete and symbolically-laden prop or a freeze-frame moment, as a preparation for integrating these words and things into a lively action.  Try some of these exercises with your students, and see how they will begin to become comfortable with some of the key words and things informing medieval drama, and begin as well to bond together into a company of players.

The spaces of medieval drama were various, labile, and indeed often mobile. The York Biblical cycle plays processed annually on pageant carts into and about the city to stop at York Minster and end on the market Pavement; small travelling companies acted other plays, performing in open spaces, inn yards, or great houses. Later, as plays retreated into manuscript, they might have been brought out for occasional declamation. Plays of such sharp moment and open engagement could, in theory, take place anywhere on this middle earth. As Peter Brook famously began his 1968 classic, The Empty Space, “I can take any empty space and call it a bare stage. A man walks across this empty space whilst someone else is watching him, and that is all that is needed for an act of theatre to be engaged,” and modern revivals of medieval plays have utilized halls, cloisters, hillsides, city plazas and streetscapes, as well as more formal stages. These three Lesson Plans encourage you to find a suitable space for your play exercises, from a classroom with the desks pushed back to the more formal stage to the outdoor green space which might draw in community passers-by. Then we offer you a selection of monologues for actors and especially powerful scenes to help develop the craft of your ensemble.

Medieval drama engaged and hoped to transform its audiences with its biting and cathartic humor, its pointed social observation, its religiously inflected heights and depths, and its joy, and it forged community in its gatherings. 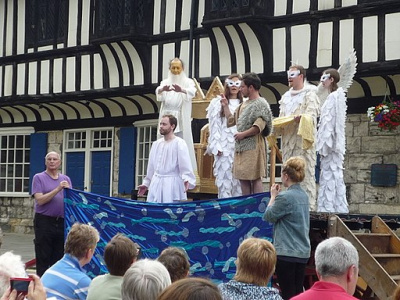 The Baptism from the York Mystery Plays performed from a cart in the streets of York in front of St William's College.

These are goals to which we can aspire in our teaching, and we can do this with youngsters and oldsters as well as formal students and professionals, and in our street and cities as well as in our classrooms and regular theaters. Some of us are fortunate enough to be theatre professionals, and to do this as the core of our vocation. Others do it more occasionally, or aspire to do something like it in our communities.

In these final three Lesson Plans we invite you to think hard about the audiences whom you hope to reach in your work, and we offer you the inspiring account of two younger academics from our group who have had the training, creativity, and institutional support to mount entire student productions, in one case for a large public university Honors College seminar filled with STEM students, and in another at a liberal arts college embedded in a large city.

Finally, we encourage you to take the tradition of street performance of medieval drama and the example of some modern adaptations to think about its transformative potential for pressing modern needs such as increased civic engagement, social justice, and ecological awareness.

One may wonder why we do not see more Medieval Theatre productions on the university stage nowadays. Part of the answer may be that for the non-medievalist, and in particular for the performer not versed in medieval drama, approaching this enterprise could be daunting, starting with the selection of the play, where to find it, whether to use Middle English or a modernized, and which edition of text to use. To help streamline this process, and because there is no such a resource readily available for pedagogical purposes, we decided to compile a short list of medieval plays both in print and online editions, as well as modernized and unmodernized, as you will find in this section .

Online editions vary considerably in quality. Below are some that we have found to be well edited for both scholarly and pedagogical purposes. 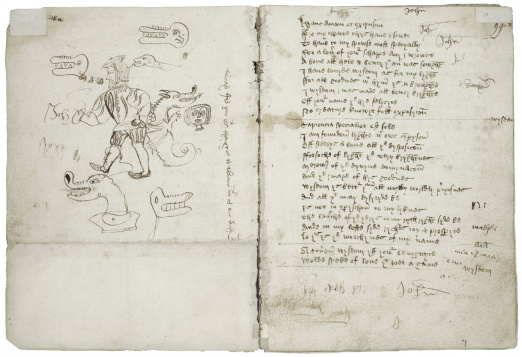 Medieval plays were first preserved in manuscripts like this unique copy of the morality play Wisdom (c. 1460-63), preserved in the Macro plays at the Folger Shakespeare Library. 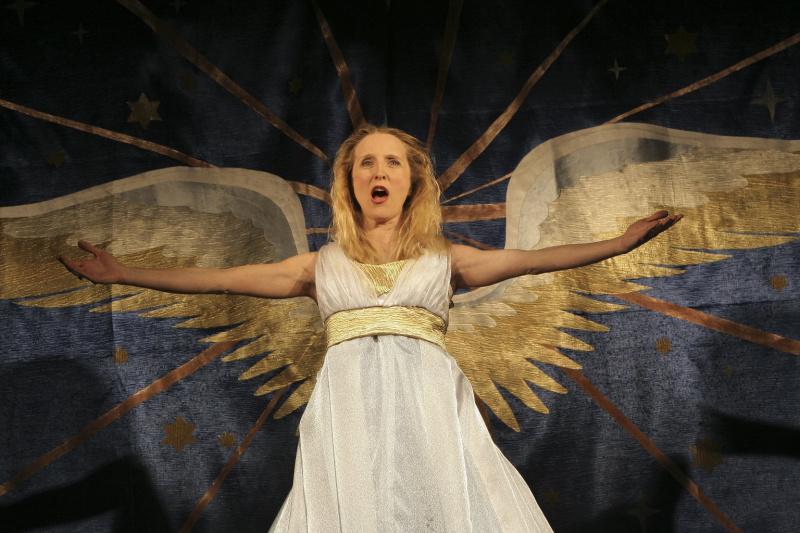 Choosing a great monologue is a task that confronts actors who are always searching for the best new monologue for their next audition. Audition pieces need to be strong, original, and not overdone.

Medieval drama provides an exceptional vehicle for exploration and it allows the actor to utilize a variety of acting techniques, genres, and styles while performing. Here are some suggestions for monologues.

While the casting suggestions given here are gender- and age-normative, directors and actors may want to think about mixing up these conventions for special effect and/or to suit their needs.

The question for many is where to begin? How do I find a play? Where do I find a good scene?  What edition is the best for performance?  We are aware that there is too much and too little out there. And we also noted the need for teachers and students alike to have access to an inventory of scenes and monologues and good editions of plays. So, we have compiled these resources to get you started.

Also, keep in mind that while in many instances characters are all male, and probably youngish to middle-age, when they are representative/allegorical characters, gender and age may not matter much when casting the roles.

Some Productions of Medieval Plays, Online

You can find digital versions of various productions online, including a 2012 Everyman production at the Portland Community College Performing Arts Center which utilized large-scale puppets and a 2016 Everyman production by the Laurier Historical Society at Wilfrid Laurier University. The play has been adapted as a commercial film twice in recent years in modernized (2002) and period (2007) productions.

The 1999 Mankind staging by Duquesne University Medieval and Renaissance Players.

University students staged an improvisatory modernized production of Mankind as a final course project in 2016.

The Blackhills Passion plays were performed in Spearfish, South Dakota from 1939 to 2008, and at their winter home in Lake Wales, Florida from 1953 to 1999.

The Mormon Hill Cumorah biblical pageant in Palmyra, New York has been performed since 1935: http://www.hillcumorah.org/

The 2013 Chester Noah play performed by the Liverpool University Players.

The Chester Mystery plays were performed in a 2008 modernized musical version.

The Oberammergau Passion Play has been performed continuously in that Bavarian village since 1634. The trailer for the 2020 production.

The Towneley Second Shepherds’ Play has long been a favorite Christmas holiday production, and was recently revived at the Folger Theater in 2016.

Yiimimangaliso: The Mysteries, a version of the Chester mysteries, was staged in South Africa and London in 2001 and has been revived since.

The Poculi Ludique Societas, or PLS in Toronto, has for over 50 years now sponsored productions of early plays, from the beginnings of medieval drama to as late as the middle of the seventeenth century.

Beckwith, Sarah. “The Present of Past Things: The York Corpus Christi Cycle as a Contemporary Theatre of Memory.” Journal of Medieval and Renaissance Studies 26.2 (1996): 35-79.

Bevington, David. From “Mankind” to Marlowe: Growth of Structure in the Popular Drama of Tudor England. Harvard University Press, 1962.

Butler, Judith. Excitable Speech: A Politics of the Performative. Routledge, 1997.

Coletti, Theresa. Mary Magdalene and the Drama of Saints: Theater, Gender, and Religion in Late Medieval England. University of Pennsylvania, 2004.

Emmerson, Richard. “Dramatic History: On the Diachronic and Synchronic in the Study of Early English Drama.” Journal of Medieval and Early Modern Studies 35:1 (2005): 39-66.

Ong, Walter. Orality and Literacy: The Technologizing of the Word. Methuen, 1982.

Turner, Victor. From Ritual to Theatre: The Human Seriousness of Play. PAJ Books, 1982