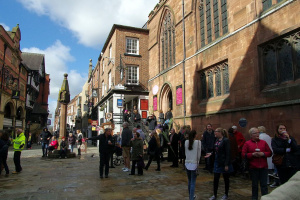 This article is the third and last of three installments of the Ten Performance-Based Lesson Plans for Medieval Theatre, as noted in the article Medieval Drama and Performance-Based Pedagogy, conceived and written by Barbara J. Bono, Maria S. Horne, and Michelle Markey Butler, and is associated with the Folger Institute's 2016-2017 year-long colloquium on Teaching Medieval Drama and Performance, which welcomed advanced scholars whose research and pedagogical practice explore historical, literary, and theoretical dimensions of medieval drama from the perspective of performance.

As the title Performing Medieval Drama: Audiences, Communities, and Adaptations suggests, this article focuses on a series of three performance-based lesson plans to help produce and stage medieval drama in your school and community.

A series of three performance-based Lesson Plans which provide preliminary training toward full performance and modern adaptation in medieval drama.

Medieval drama engaged and hoped to transform its audiences with its biting and cathartic humor, its pointed social observation, its religiously inflected heights and depths, and its joy, and it forged community in its gatherings. These are goals to which we can aspire in our teaching, and we can do this with youngsters and oldsters as well as formal students and professionals, and in our street and cities as well as in our classrooms and regular theaters. Some of us are fortunate enough to be theatre professionals, and to do this as the core of our vocation. Others do it more occasionally, or aspire to do something like it in our communities. In these final three Lesson Plans we invite you to think hard about the audiences whom you hope to reach in your work, and we offer you the inspiring account of two younger academics from our group who have had the training, creativity, and institutional support to mount entire student productions, in one case for a large public university Honors College seminar filled with STEM students, and in another at a liberal arts college embedded in a large city.Finally, we encourage you to take the tradition of street performance of medieval drama and the example of some modern adaptations to think about its transformative potential for pressing modern needs such as increased civic engagement, social justice, and ecological awareness.

Now that you have read, studied, thought about, blocked, and even begun to act and stage a selection of medieval dramas in your class or group, consider whether, when, and how you would like to perform these plays—single scenes, single pageants, or even an entire cycle or full-length play—for an outside audience. Some possibilities include an in-class performance at the end of the unit or the semester, for yourselves or invited outsiders; a performance as part of a student conference or festival; or a community performance. Discuss and plan for whatever resources you are going to need for such a performance, including not just the choice of text and the overall artistic vision of it, but also the budget, space, more extensive costuming, lighting and special effects, outreach, publicity and advertising, etc. This is the moment to call upon all of the different abilities of your group—e.g. students from marketing, engineering and the sciences, activists, etc., etc.—since you will need far more than just literary critics and actors.

In discussion, divide up student roles for the upcoming production and establish an action plan and calendar for each group.

Students should be focused and engaged in the task, and within a class session or two have and begin working toward a firm and realistic calendar for production.

Medieval drama came from the life of its many communities—our records of it are largely civic-based (see REED), and even when it was performed by acting troupes those productions were extraordinarily responsive to the occasional performance conditions they encountered in the streets, in great halls, or in the open air—and there is a long tradition of modern “amateur” performances of medieval drama, some of them still active, and others recorded in modern media such as film and video. 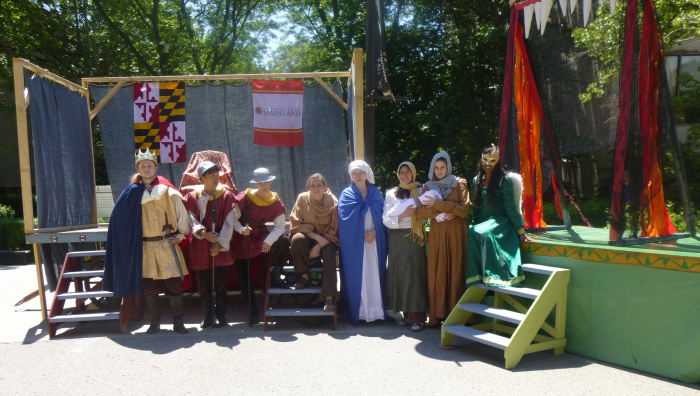 The Lord Baltimore’s Production of the N-Town “Massacre of the Innocents/ Death of Herod” as performed on June 6, 2015,   Festival of Early Drama at the University of Toronto.

Today the fact that virtually everyone now carries a smartphone video camera on their person makes it enticingly possible not just to mount such amateur performances, but to preserve and disseminate them as well.


Furthermore, the many challenges of putting on such a production can attract and employ the skills and talents of many kinds of students—STEM, business and management, media and arts, differentially-educated and prepared, ablest and disabled, etc.—working creatively together. Some of us have mounted such productions in class—from small-scale scene work to full plays or sequences—and some of us aspire to move them out from the classroom to larger audiences as live productions, films, or even renewed civic pageants. For example, one member of our group is part of a community activist organization in a multicultural, religiously-plural city neighborhood which might mount a street festival pageant-wagon style cycle play stressing economic-justice and environmental issues.

In this section we include a brief description and an attached fuller account of two such college-based performances of full medieval plays, mounted by instructors who had the advantage of having a significant part or virtually all of the semester to develop and put them on. In addition, we include a Syllabus which implies the preparation, stages, and timeline required to mount such performances. We encourage you to follow these examples, all or in part:

Syllabus: Fireworks and Trap-Doors: A Hands-On Workshop in Early Theater Production and Special Effects taught by Michelle Markey Butler. The 15-week course calendar for the course details scheduled assignments and readings. The course culminated with a full performance of an adaptation of the Tolkien short story “Leaf by Niggle” as a “medieval” play and the N-town “Slaughter of the Innocents. Death of Herod Part 1 and Part 2 culminated the Spring 2015 course. Blog posts for both performances can be found at Lord Baltimore’s Company

Many of today’s students hunger for social engagement and efficacy, including in the arts and artistic practice. The example of medieval drama--which arose from the deepest issues and questions of its communities; involved their technical, economic, political, and confessional energies; and drew them all into ritual and symbolic practice and considerations--provides a bridge to such engagement in the twenty-first century. Such efforts can stand near the cherished center—rather than merely the decorative periphery—of educational communities such as high schools and colleges; they can enable and direct restricted communities like prisons and eldercare homes to life-sustaining and creative activity; and they can enliven daily communities such as our neighborhoods and towns. Performance is everywhere; medieval drama channels it in communitarian, significant and transformative directions. That would be a good life lesson proceeding forward from academic “Lessons” such as these. 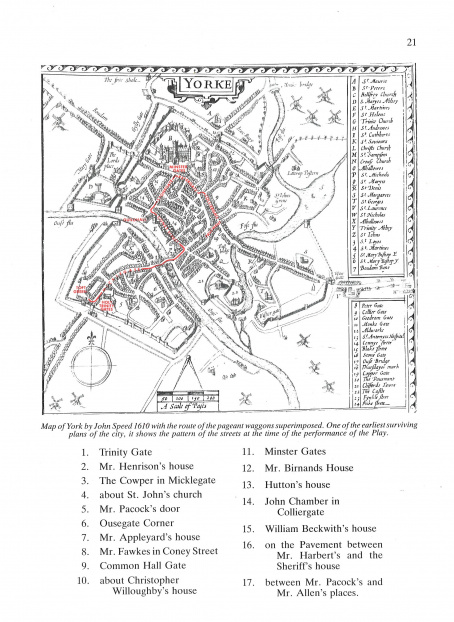 The York Mystery Play by Eileen White, 1984, published by the Yorkshire Architectural and York Archaeological Society. Image supplied by the Mystery Play Archive at the National Centre for Early Music. Page 21 shows the route through York, and names the playing stations of the performance on Corpus Christi day 1569.”

Medieval drama is truly world drama--then, when it offered broad narratives of history or allegories of human behavior or natural processes--and now, when it continues to be widely current and adaptable across world cultures. “Creation to Last Judgment” plays—both ones performed as civic cycles, like those from York and Chester, and those compiled in manuscript, like the N-Town and Towneley plays—presumed to treat all of salvation history. Morality plays such as Mankind and The Castle of Perseverance dramatized the struggle for salvation of representative everymen. Saints’ plays centered on exemplary figures of piety or heroism. Derivative forms like Henry Medwall’s Nature, John Skelton’s Magnificence, or the plays of John Bale dealt with problems in natural or moral philosophy or political theory. The sweep and scope of medieval drama is part of its attraction, and it held its traditional forms for hundreds of years, while its revivals and adaptations, from passion plays, to biblical pageants, to stark allegories, to rollicking city comedies, to present-day dramas of truth and reconciliation, have had and continue to have broad appeal. For some of the final exercises in our unit or course, we would like to invite students to explore and to think creatively about some of the current adaptations of the stories, motifs, and scope of medieval drama to the modern world, and perhaps to make their own “world” art.

Brainstorm with students about what some modern adaptations of medieval plays might look like. To get them going, explain the world-wide endurance of Passion Plays such as those in Oberammergau, Bavaria, and in Catholic countries; tell them about the on-going Mormon extension of biblical drama in Palmyra, New York; have them read Jenna Soleo-Shanks account of a modern feminist re-working of Hrotsvit of Gandersheim’s Callimachus; and show them images and clips from productions such as the late 1990s South African Yiimimangaliso: The Mysteries. Have them speculate about how productions of such socio-political, religious, environmental, and community import might take to the streets or to newer media again as aspects of public art. If time and energy permit, have them attempt a piece of their own such broadly significant art: a song; an original artwork; a children’s book; a short film or play; their own pageant or cycle.

Students should feel intrigued by the private creative and public extensions of this wide-ranging and traditional art form, and ideally feel impelled to continue to re-cast it in contemporary forms.