This article collects the children's exhibition material featured in To Sleep, Perchance to Dream, one of the Exhibitions at the Folger.

People have always been curious about their dreams. In Shakespeare's day, people were especially curious to know what their dreams meant, because many people thought that dreams could tell you what would happen in the future! 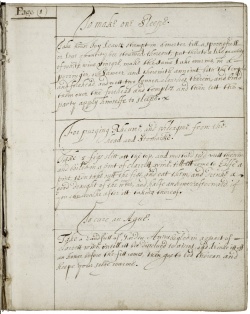 In Shakespeare's day, people used both medicine and magic to fall asleep, get rid of nightmares, and even control their dreams!

Books of recipes and remedies were common items, often kept within a family and handed down between generations. Look at Mary Granville's book to see an example from the Folger collection. The words "To make one sleepe" are written across the top of the page.

An Elizabethan recipe book included instructions on how to make "A Dormant Drink" that would make whoever swallowed it sleep for two whole days. Does this remind you of any of Shakespeare's plays? (Hint: This play is set in Italy and tells the story of two young lovers.)

Does your family have a secret recipe?

Write it down on a piece of paper. To make the recipe look very old, take a used tea bag and carefully rub it over one side of the paper. Allow to dry. You may also gently crinkle the paper to create wrinkles.

Below is a list of ideas people used to have on ways to control dreams. Do you think any of these would work? Why or why not?

An Elizabethan bedroom would have looked very different from a bedroom today. Often, only wealthy people had separate rooms for sleeping, and having a bedroom to yourself was very unusual. Most houses had the beds in rooms that were also used for other purposes.

Not only were bedrooms often shared, but bed sharing with other people was common. Even Catherine Howard, who later married Henry VIII and became queen of England, had to share a bed when she was growing up!

People who could afford to decorated their bedrooms with tapestries, which not only looked nice but helped to keep drafty rooms warmer. They also might write sayings, or poesies, onto the walls or ceiling. Poesies were short sayings, often about sleep, that they could look at and think about while in bed.

Some people kept candles next to their bed, and they might also have a favorite book or two nearby. The Bible was often kept at the bedside.

Most people changed into pajamas before going to bed. Men wore nightshirts and women wore nightgowns. Sometimes, these were beautifully decorated with embroidery.

Keeping beds clean was very important! Mattresses were usually made from straw or feathers, which bugs liked to to live in. Many books had instructions on how to keep bugs out of bedding, or get rid of them if they were already there.

What is the woman in this picture doing?

Getting a good night's rest was just as important in Shakespeare's day as it is now. People believed that enough sleep was part of staying healthy—but too much sleep could cause problems!

How much sleep someone needed was determined in part by what kind of temperament, or humor, that person had. The theory of the humors was based on an ancient belief that the body had four fluids, or humors in it, that influenced a person's health and character.

In a healthy person, the humors were in balance. However, a person might have a dominant humor that influenced his or her health as well as personality.

In the 16th and 17th centuries, many people believed that dreams could foretell future events. This made finding out what a dream meant very important. Talking to a professional dream "interpreter" was one way of finding out. People also read books that they believed could help them interpret their dreams.

One of the most famous dream interpreters was John Dee, who worked for Queen Elizabeth. He was a brilliant mathematician and scholar, who was also interested in magic. John Dee's library was the largest in England, with almost 4,000 books! Dee helped the queen chose her coronation date based on astrological readings, and he became a trusted royal adviser.

Some people think that he may have even inspired the character of Albus Dumbledore, the wise head of Hogwarts School, in the popular Harry Potter series.

Listen to Carole Levin discuss John Dee and one of his most important dreams.