The Oxinden cipher is an early modern substitution cipher used by the letter-writer and poet, Henry Oxinden of Barham (1609-1670) and his second wife Katherine Oxinden nee Culling (1624 - 1698). Instances of the cipher can be found in letters held by the British Library and almanacs held by the Huntington Library. 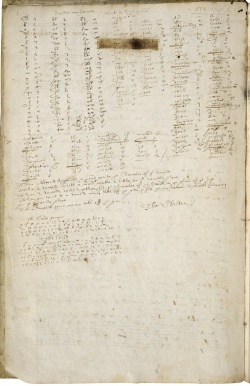 The Oxinden cipher consists of twenty-five symbol substitutes for twenty-four letters found in the modern English alphabet – treating i and j as a single letter, and u and v as a single letter – along with a symbol for the digraph th. Neither Henry nor Katherine appear to use the letter thorn – þ – for th in their other writings, however it seems likely their use of a separate symbol for th reflects the legacy of the thorn in older versions of the English alphabet. 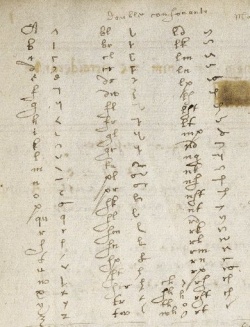 Henry's invention of the cipher dates to no later than January of 1641, when he encoded information in his annual almanac. It appears to have remained generally consistent over the following decades, suggesting it was already fully formed at this time.

Although he married Katherine in 1642, his use of the cipher to encode information about love letters sent to another woman in 1646 suggests that he did not initially share the cipher with his wife. The first known evidence of Katherine using the cipher only dates to letters sent in February of 1663. Her version of the cipher is largely consistent with Henry's, however there are two primary differences: while her husband tended to use the letter y as the symbol for g, Katherine instead generally used the letter y to mean y, and a modified y-like symbol for g. Katherine also often used the numeral 2 – Henry's symbol for the letter t – as a shorthand for the word "to". She continued to employ the cipher even after Henry's death.