Folger manuscript V.b.110 is an early modern miscellany written by the letter-writer and poet, Henry Oxinden (1609-1670). An eldest son, Oxinden was educated at Corpus Christi College, Oxford in the late 1620’s and was briefly a resident at Gray’s Inn, London. However, he would spend the bulk of his life in rural Kent, far from the centers of English intellectual life, living as a country squire. 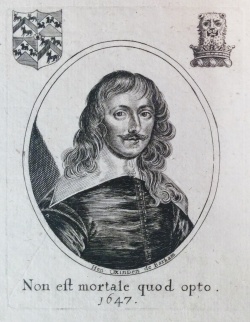 V.b. 110 dates from his years in Kent, with entries spanning from the early 1640’s to the eve of his death. Apparently written for private use (“let nobody see this booke” is written on the top of its first page), V.b.110 records in great detail the reading habits, interests, and thoughts of an intellectually curious member of the rural gentry during some of the most tumultuous decades of English history. Oxinden’s miscellany has achieved a small measure of notoriety for the contents of a single important page which lists 123 printed early modern plays, many in their first edition.[2] It is presumably this page that explains its acquisition by the Folger Shakespeare Library. However, theater occupies a relatively small place in the miscellany. Instead, Oxinden’s considerable interest in literature is reflected overwhelmingly in poetry on a variety of subjects sacred and profane, some of it quite bawdy. Poetry is, of course, a common element in Renaissance miscellanies in general, but its pronounced presence in V.b.110 likely reflects Oxinden’s personal literary ambitions, as the miscellany dates from the same years that Oxinden published all four of his own volumes of poetry. We have relied heavily in this edition on the Union First Line Index to help identify as many of the poems in the miscellany as possible.

What follows are excerpts from Oxinden’s miscellany, which together provide a representative sample of the diversity and coherence of his text. It is our hope that these extracts call attention to V.b.110’s potential as a scholarly source, particularly if used in conversation with Oxinden’s other surviving works: his voluminous correspondence (of which two volumes have been published) and his library of approximately 200 books (some of which are annotated) at the Canterbury Cathedral Library.[4] As the selections offered here attest, Oxinden’s miscellany is an incredibly diverse text with much to offer to scholars. This work is an important source for many topics including, but not limited to, mid-seventeenth century provincial intellectual life, early modern literature and poetry, ecological and agricultural history, and the cultural history of early modern ideas about religion, women, and sexuality.

Henry Oxinden's Miscellany is a single folio volume of ca. 540 pages, bound in full vellum over pasteboard. The pasteboard is contemporary with the manuscript, but the vellum most likely dates from the eighteenth century, replacing the original covers. The book’s cover is relatively elaborate, with hand-drawn borders and other decorative elements, including five Latin mottos, and two separate notes of ownership: "Lee Warly Canterbury, 1764," and an affixed booklabel of Henry Huth (1815-1878), a later owner. The Miscellany’s foliation is [4], 1-280, 383-539 p. (with 5 irregularities). As represented in this edition, the manuscript is predominantly written in English, with significant amounts of Latin, occasional Greek words or phrases, and small amounts of shorthand.

Description of Hand and Scribal Habits

With the possible exception of a few marginal notes which may be in a later hand, V.b.110 appears to have been composed entirely by Henry Oxinden, using several different handwriting styles available in English scribal culture during the period of its composition (ca. 1642 to 1670). Oxinden’s writing ranges from a direct, efficient italic, to a relaxed and somewhat flattened secretary hand lacking many of the flourishes and loops common in the ‘rounded’ secretary scripts of professional scribes at his time. Like many scribes of the period, Oxinden tended to reserve secretary hand for English text; the Latin entries in his book are almost always italic. However, he sometimes also used italic characters when writing in English, especially, it seems, when he was transcribing published tracts. One example of this tendency is Oxinden’s transcription of extracts from Richard Head’s scandalous book, The English Rogue (1665) which is written in a predominantly italic hand (Oxinden, 99-100). However, Oxinden is not consistent in this treatment of published material, as he renders his selections from Sir Walter Raleigh's Instructions to His Son and The Dutiful Advice of a Loving Son in secretary script (Oxinden, 490-95). He sometimes simply just mixes italic and secretary hands. Often, for example, his d and bucket-r forms appear distinctly secretary, even as many of the h- and w-forms, as well as a host of majuscule letters, are rendered italic. This manuscript also contains very occasional lapses into shorthand (e.g., Oxinden, 8).[5]

Many of Oxinden’s entries leave the impression of having been hastily, or at any rate sloppily, composed. Aside from the occasional, possibly haste-induced tendency to write letters on top of each other, to smear ink, or to draw otherwise misshapen forms, some of the most habitually troubled features of Oxinden’s secretary hand are the following: the bowls of his miniscule o and a frequently remain open, sometimes making it difficult to distinguish between the two letters; his th is barely distinguishable from a simple butcher-hook h, to which he adds what might be described as a ligature-t, whose stem blends with a descending approach stroke to the h, conveying in the process the mere hint of a cross-bar; the cross-bar of Oxinden’s miniscule t-form is often drawn at the very foot of the stem, where it sometimes resembles the foot of a majuscule roman L; his miniscule butcher-hook h has a flat head instead of the more conventional looped one; many of his terminal s-forms consist simply of a long, stick-like downstroke, something between a modern cursive s and a swash-s missing its forward-curving head; Oxinden often miscounts his minims. A visually striking feature of Oxinden’s handwriting is his habit of drawing marginal daggers, seemingly to serve the purpose of a manicule. Oxinden however also draws conventional manicule forms, sometimes in entries also bearing daggers, and it is unclear whether he intended any difference in these forms’ significance (e.g., Oxinden, 57).

This edition intends to serve as a guide for researchers of seventeenth century manuscripts into the incredibly rich source of Folger MSS V.b.110, acting as a supplement to the original manuscript held at the Folger Shakespeare Library (and available in the LUNA digital catalogue online). While the editors have made a concerted effort to replicate the orthography, lineation, pagination and interlineal insertions, this edition does not provide a perfect representation of the original manuscript. In the interest of making the text more accessible, the editors have made several decisions which affect the visual experience of the document. First, and most strikingly, the editors have chosen not to reproduce the ruling in the original document. Because the rules seem to have been intended to help Oxinden separate entries, we have chosen to replace them with a simple line break. A second line break has been added to pages of poetry which had rules seperating poems as opposed to line breaks separating stanzas. Second, we have not tried to exactly reproduce the exact spacing of the original manuscript. Instead, we have opted for a simplified representation that we feel is in keeping with the general format of the text. Thus, we have centered those lines (usually section titles or titles of poems) that appear to have been roughly centered in the text, standardized indentation and begun each line with a uniform margin. Likewise, marginal notations on the manuscript are sometimes spaced slighly differently than they appear in the text. We have also deleted extra spaces between the terminal letter of words and punctuation marks. Scholars interested in exactitudes of spacing and placement on the page should consult the original.

Following the standard conventions of a semi-diplomatic transcription, most non-modern abbreviations have been expanded and italicized. In addition, superscript abbreviations have been silently lowered. Following the convention for transcribing Roman numerals, long i graphs here are transcribed with a “j.” The symbol that appears to be the standard ---­­es brevigraph is here transcribed as an “s,” since in many cases it already follows an e and the repetition would be redundant. Square brackets around words indicate the editors supplying words where the manuscript text is not present or illegible as the result of damage, except in the case of the word [lacuna] which indicates the inability to supply words due to the tearing of the manuscript (e.g., Oxinden, 12). Characters are reproduced where possible and otherwise ✧ indicates an illegible character or one that cannot be reproduced typographically. Split words appear as they do in the text. The striking Oxiden manicules and daggers are represented by ☞ (or ☜ and → (or ←)respectively, and have been placed along the margin in which they appear in the text. However, while marginal notes have been reproduced in the margins, manicules and daggers have been reproduced in the text, excepting cases where the manicule or dagger is indicating the text of a marginal note. Editorial notes on the nature and origin of the text appear in footnotes at the bottom of the page.

Access the transcriptions from the edition here in PDF form.