Louis Booker Wright (1899–1984) was an author, scholar, and educator who served as the second director of the Folger Shakespeare Library.

Wright was born on March 1, 1899, in Greenwood County, South Carolina to Thomas Fleming Wright, a schoolteacher, and Lena Booker Wright. Both of his grandfathers served in the Confederate Army of Northern Virginia during the American Civil War; his paternal grandfather served under James Longstreet, and his maternal grandfather under Thomas "Stonewall" Jackson.[1] Among the reading material Wright enjoyed as a child were fairy tales and the works of Livy.[2] In the 1910s, Wright matriculated at Wofford College, but swiftly enlisted in the Student's Army Training Corps, and served for at least sixth months in Plattsburgh, New York, during the First World War. At war's end, he and a veteran of the Army Air Corps worked on government contract as airmail pilots. He soon returned to Wofford to complete his studies, and graduated in 1920 with a B.A. in chemistry and a minor in biology. He then became a reporter for the Spartanburg Herald.[3]

Not fully satisfied as a reporter after leaving the Spartanburg Herald for the Greenwood Index-Journal, Wright abandoned journalism in 1923 for a position as a teaching assistant in the English department of the University of North Carolina at Chapel Hill, where he received his Master's degree in 1924 and his Ph.D. in 1926.[4] Wright wrote his dissertation on elements of vaudeville in Elizabethan drama.[5] He continued teaching at Chapel Hill until 1928, when he and his wife, Frances (née Black), moved to London upon his reception of a Guggenheim Fellowship to study English drama before 1642.[6] The book that resulted from this fellowship, Middle Class Culture in Elizabethan England, was published in 1935. Upon completing his research in London, Wright returned to teach at Chapel Hill. He remained there until 1932, though he spent the previous year as a visiting scholar at the Huntington Library in San Marino, California. In 1932, he officially joined the Huntington staff.[7] 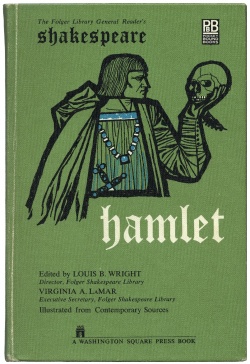 The cover of the 1959 Folger Edition of Hamlet. Folger Digital Image 9003.

After the death of Joseph Quincy Adams, Jr., the Library's first director in 1946, the Amherst Board of Trustees approached Wright in 1947 as a candidate for the directorship. He officially began work at the Library until July 1, 1948. Wright made a multitude of administrative changes to the Library. He removed a barrier to the entrance of the reading room, permitting easier access to readers, and removing Library guards of their arms. Wright hired Eleanor Pitcher to organize the Library's acquisitions. He and Pitcher continued Henry Clay Folger's practice of paying booksellers immediately for purchases; prompt payment of bills generated positive relationships with booksellers and gave the Folger an advantage over other competitive buyers whose bills took longer to process.[8]

Under Wright, air conditioning was installed in the building in 1948, an essential change to the hot and stuffy reading room (now the Gail Kern Paster Reading Room). Rare eighteenth- and nineteenth-century volumes stored in the reading room were moved down to the vault and replaced with reference works; previously, scholars in need of reference works used those available at the nearby Library of Congress. Wright also shifted the Folger's classification system from one designed specifically for the Library by Edwin Willoughby to the Library of Congress classification system.[9] Horace Groves and Robert Lunow were hired to direct the photography and conservation departments, respectively. In 1959, a new wing was constructed, adding office space, new stacks, and conference and seminar rooms.[10]

During his tenure, the first full-length performance of shakespeare in the Elizabethan theater occurred. In 1949, the Amherst Masquers performed Julius Caesar on April 3, 1949 in a telecast performance funded by NBC. During the play's intermission, Wright gave commentary, along with the current president of Amherst College, Charles W. Cole.[11] The performance proved legally troublesome, as it violated a variety of Washington, D.C. fire code and zoning laws; subsequently, Wright used the space only for lectures and small musical events.[12]

Among the scholarly work Wright completed while director was the first series of Folger editions of Shakespeare's works, known as The Folger Library General Reader's Shakespeare. Wright arrived as director intending to publish separate edited volumes of each of Shakespeare's plays, though he could not begin work on the project until the end of his first decade as director. Along with executive secretary Virginia LaMar, Wright annotated each play with notes to make the works more accessible to the public, completed after comparing Early modern Folio and Quarto editions of the works with modern editions. Under Wright, the Folger also began a publishing program for staff, the Folger Booklets on Tudor and Stuart Civilization.[13] This series of short pamphlets allowed staff members to publish research based on their work and interests; wide-ranging topics included Elizabethan travel, Elizabethan gardens, the Spanish Armada, and interactions between Dutch and English culture of the period.

In 1968, the year of Wright's retirement, Elizabeth Niemyer replaced Eleanor Pitcher as head of acquisitions upon the latter's death.

After his retirement from the Folger in 1968, Wright continued to serve in a variety of organizations as advisor and board member, including the Modern Language Association and the National Geographic Society. He was a trustee for the Harry S. Truman Institute for National and International Affairs, and spoke in 1955 at a Cleveland, Ohio fundraiser for the development of the Harry S. Truman Presidential Library and Museum. From 1950-1971, he was chairman of the advisory board of the John Simon Guggenheim Memorial Foundation.