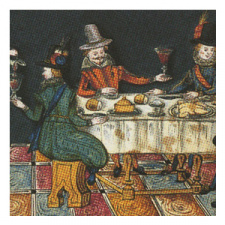 Free Folger Friday: Flowers, Fashion, and the 18th c. Dining Room, one of the Talks and Screenings at the Folger, was held in the Elizabethan Theatre on Friday, February 9, 2018 at 6:00pm.

When playwright and poet William Congreve (1670–1729) wrote The Way of the World at the start of the eighteenth century, he set his play in an opulent, glittering London: a city flush with wealth made possible by Britain’s empires overseas. In this free lecture, historian Zara Anishanslin discussed the visual and material worlds of Congreve’s original play, describing the links between the eighteenth-century consumption – in many senses! – of fashion, food, and design. Audiences learned how luxury goods that were imported to London from across the Atlantic and Pacific Oceans, and how these plants, animals, and minerals were used to enrich one critical eighteenth-century industry: silk manufacturing. 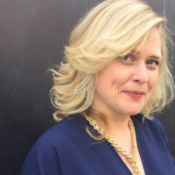 Professor Zara Anishanslin specializes in Early American and Atlantic World History, with a focus on eighteenth-century material culture. Anishanslin received her PhD in the History of American Civilization at the University of Delaware in 2009, where her dissertation won the prize for Best Dissertation in the Humanities. In 2011, it also won the University of Pennsylvania’s Zuckerman National Prize in American Studies.

In 2014-15, Anishanslin was a Mellon Postdoctoral Fellow at the New-York Historical Society. In 2009-2010, Anishanslin was the Patrick Henry Postdoctoral Fellow in the Department of History at Johns Hopkins University. Additional fellowships include grants from the Omohundro Institute of Early American History and Culture, The Huntington Library, the American Antiquarian Society, Center for the Humanities at the CUNY Graduate Center, The Library Company, Harvard Atlantic Seminar, the Massachusetts Historical Society, the McNeil Center for Early American Studies at the University of Pennsylvania, Henry Luce Foundation/American Council of Learned Societies, and the Winterthur Museum.