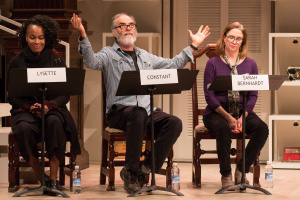 Free Folger Friday: Bernhardt/Hamlet by Teresa Rebeck, one of the Talks and Screenings at the Folger, was held in the Elizabethan Theatre on Friday, January 19, 2018 at 5:00pm.

Alongside Folger Theatre's production of The Way of the World, playwright and director Teresa Rebeck presented a reading of her new play, Bernhardt/Hamlet, starring Holly Twyford as Sarah Bernhardt.

As one of the most famous actresses of the 19th century, Sarah Bernhardt was praised by the likes of Victor Hugo and Mark Twain for her incredible performances and legendary “golden voice.” Rebeck’s new play follows Bernhardt and her company as she navigates her international reputation and Shakespeare’s words in preparation for one of the greatest roles of all time: Hamlet, Prince of Denmark.