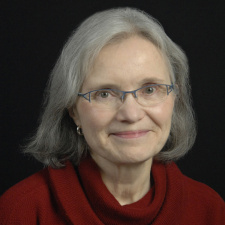 Free Folger Friday: Georgianna Ziegler on America's Shakespeare, one of the Talks and Screenings at the Folger, was held in The Haskell Center for Education and Public Programs on Wednesday, February 17, 2016 at 6:30pm.

The Folger's Louis B. Thalheimer Associate Librarian and Head of Reference, Georgianna Ziegler, provided a behind-the-scenes preview of the exhibition America's Shakespeare, on view from April 7-July 24, 2016.

Dr. Georgianna Zielger was the Folger’s Louis B. Thalheimer Associate Librarian from 1992 – 2016 and is now Head of Reference Emerita. A past president of the Shakespeare Association of America, Ziegler curated a number of Folger exhibitions, including Shakespeare's the Thing, Shakespeare's Sisters, Elizabeth I: Then and Now, and Shakespeare's Unruly Women, and co-curated Marketing Shakespeare and Golden Lads and Lasses, among others. She is the author of numerous journal and reference articles. Before coming to the Folger in 1992, Ziegler taught Shakespeare and was curator of the University of Pennsylvania’s Furness Shakespeare Library.