(Redirected from Golden Lads and Lasses) 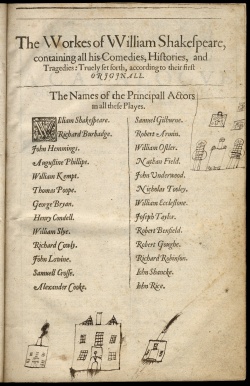 "Golden Lads & Lasses": Shakespeare for Children, one of the Exhibitions at the Folger opened on January 21, 2006 and closed on May 13, 2006. The exhibition was curated by Jeremy Ehrlich, Rosalind Larry, & Georgianna Ziegler.

Where did you first encounter Shakespeare? Were you in a theater, seeing a play? Were you acting out a scene in school? Were you eating popcorn, watching a movie? Were you in bed, listening to your parents read a story?

"Golden Lads and Lasses": Shakespeare for Children tells the story of all the ways that Shakespeare and his tales have been presented to kids for hundreds of years. You'll see novels, plays, comic books, movies, toys, and paper dolls from the seventeenth century up until today.

Find out why plays written four hundred years ago are still exciting. With his witches, fairies, kings, queens, and clowns—his stories of love, ambition, and adventure—it's easy to understand why Shakespeare is for the young and young at heart!

In 1564, William Shakespeare was born in the English town of Stratford-upon-Avon. He was the eldest son of John Shakespeare and his wife Mary Arden. John was a prosperous merchant who became Lord Mayor of Stratford.

Shakespeare’s grammar school still survives in Stratford today. He was most likely instructed in Latin, rhetoric, and religion. Also, he would have studied at his own school desk, and read his lessons from “horn books”—text printed on paper or parchment, glued to wood, and covered with a piece of clear animal horn to protect it. 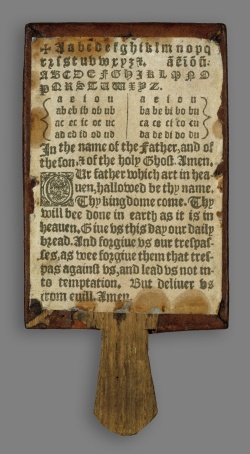 Horn books, were used by English children from the fifteenth to the eighteenth centuries to learn basic reading skills.

The earliest examples were made of thin panels of oak wood and had labels bearing the alphabet, numbers, and the Lord's Prayer pasted on them. A very thin and transparent veneer of cattle horn covered the label. A wooden handle was fixed to the frame so that the horn book could easily be held in a child's hand.

For more information on horn books, see B. Folmsbee's "A Little History of the Horn-book." Stevens, 1965.

"All the World's a Stage"

If you were a boy in Shakespeare’s day, you could pay a penny—about the price of a loaf of bread—to stand and see a play, or you might even act in his company. Shakespeare’s group of actors, called the Lord Chamberlain’s Men, performed at the Globe Theatre in London.

All kinds of people saw the plays, from apprentices to merchants, their wives, and members of the royal court. Men and boys performed all the roles, even the female ones. Imagine boys playing the part of Juliet, Ophelia, or even Cleopatra! The audience ate nuts, instead of popcorn, during the performances.

Children have interpreted and interacted with Shakespeare’s plays since they were first published. Young people have colored and doodled in books; drawn pictures of characters; and even created their own interpretations of Shakespeare's works. The Bard even inspired a father and daughter, David Scott Kastan and Marina Kastan, to publish a book of poetry together.

The Shakespeare first folio shown here has been doodled on by a young girl in the 1700s. Today, this book is priceless, but once it was just another book in someone's library waiting to be read and enjoyed.

Inspired by Shakespeare, Written for Kids 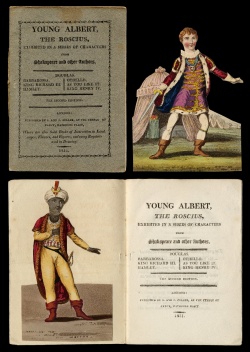 Shakespeare has inspired countless books, plays, and poems for children to read, and wonderful games, dolls, and toys for them to enjoy.

Authors have rewritten Shakespeare’s tales and poems for kids since the late 1700s. They produced little books for small hands, like The Lives and Tragical Deaths of Hamlet, Prince of Denmark, and the Lovely Ophelia, which tells the story of Hamlet showing how one murderous deed can lead to the ruin of many people. Sometimes the books would be very large. A big illustrated book, such as Scenes of Shakespeare for the Young, shown here, would have thrilled young readers and been a special birthday or Christmas present.

Shakespeare even inspired paper dolls and picture books. Nineteenth-century English picture books, like Tales from Shakespeare in Verse, which tell stories through illustrations and very few words, are the forerunners of the comic books we read today.

Shakespearian paper dolls, like Young Albert, the Rosicrucian, invited children almost two hundred years ago to dress up the nineteenth-century child actor, "Young Albert" like different characters from plays. Two of the dolls, Shakespeare's Richard III and Othello have inter-changeable heads—one white, one black—that come with the costumed figures and fit into slots on the back. Modern Shakespeare paper dolls are different. They have paper bodies on which to try different costumes.

With all of these retellings, lavishly illustrated editions, spin-offs, and toys, it is easy to see why Shakespeare's stories have been embraced by children and adults for hundreds of years.

“Golden Lads and Lasses”: Shakespeare for Children is dedicated to the memory of Janet Field-Pickering, beloved Head of Education at the Folger Shakespeare Library from 1995 to 2005. Janet was a friend to teachers and students of all ages, bringing energy and vision to the Folger’s educational programs. Believing that Shakespeare is for all children, Janet eagerly participated in the planning of this exhibition. We dedicate it to her memory.

Do you want to learn more about Shakespeare, his times, and his plays?

Take a look at this Bibliography of readings related to "Golden Lads & Lasses": Shakespeare for Children. Then go to your local library or book store and check out some of the books still in print that are displayed in the exhibition.