Ceremony and Text in the Renaissance

Ceremonial, ritual, pageantry, popular festivity-- reiterated, communal, symbolic activities such as these organized human experience during the Middle Ages and much of the Renaissance, assigning to each individual a social role and a particular identity, as they had in most earlier societies known to us. But the era of the Renaissance and Reform witnessed a questioning of ceremonial symbolism-- most visibly though not exclusively in the religious sphere. literary texts and historical documents of the period recurrently bear witness to both the continued force of ceremonial symbols and the new challenges to them.This NEH Summer Institute for College and University Faculty will explore the complex interaction of texts and ceremonial performances from the perspectives of many disciplines, including . anthropology, social history, theology, choreography, and politics. Drawing upon the perspectives of these and other disciplines, discussion will range over a number of symbolic activities, among them narrative, the popular theatre, courtly entertainment, and civic spectacle. Although the institute will focus primarily on England, continental texts and occasions will also receive attention. The aim will be not to "cover" the immense amount of relevant material, but to suggest approaches to its multiple facets. Topics may reflect the interests of the participants. The group may be asked to consider such various matters as the functions of ritual in human society, the meanings of an early Tudor disguising, the conflicting definitions of the sacraments of the church, the sexual and metaphysical implications of formal dancing in the Italian Quattrocento, the staging of royal entries and Elizabethan chivalric rites, ceremonial symbolism in Dante's Purgatorio and Shakespeare's Henriad.

Among the questions to be addressed:

Semiotic change Do the quarrels over the status of the sign, never more vigorous than in the sixteenth century, signal a genuine change in communal signifying practices?

Improvisation Did men and women of the Renaissance feel freer to play with ceremonial forms than they had in earlier periods, and did their ceremonial play reveal a different character? Was there a new sense of liberation in the play with such forms, and was it counter-balanced by feelings of anxiety?

Female ceremonial roles What p lace did women have in the evolution and execution of ceremonial performances? How did those observances specifically assigned to women differ from others, and what was their social contribution?

Symbolism and the modern state Are the ritual and pageantry of the emergent national state to be understood primarily as manipulative? What light does recent criticism shed on the semiotics of politics?

Literary forms In what various ways do the theatre, poetry, and prose fiction reflect the assumptions of a ceremonial society as well as its interminent subversions? Is ceremonial parody, in and out of literature, itself inherently subversive?

Transhistorical musings Is ceremonial symbolism moribund today? Has this primordial signifying practice been definitively demystified? Are our private and communal lives simplified or impoverished by its waning? Can the range of Renaissance experiences help to clarify our own? 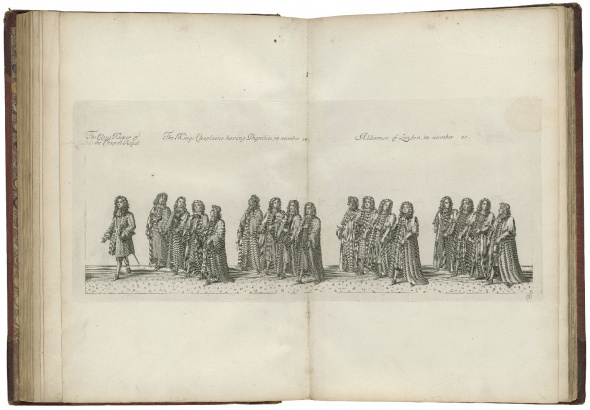 Source Call No. S652: The history of the coronation of the most high, most mighty, and most excellent monarch, James II.