Bird's-Eye Plan of the West End of London, ca. 1660 by Wenceslaus Hollar (1607–1677), comprises roughly the modern district WC2. The etching, measuring 353 x 457 mm, shows signs of having been previously folded and is mounted on 18th-century paper. 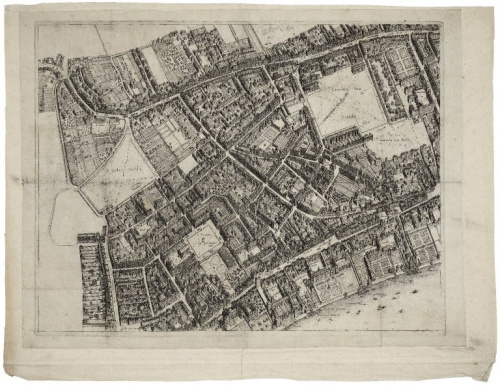 The Folger Shakespeare Library holds a rare example of a proof sheet for Wenceslaus Hollar’s intended "monument and masterpiece," Map of London and Westminister (London: ca. 1660), a fourteen by eighteen inch section of a bird's-eye view that he intended ultimately to have measure five feet high by ten feet wide (ART 264- 511 (Size L)). The plan provides a bird’s-eye view of the area from St. Martin’s Lane on west to Chancery Lane (northern part) on east, and from the river north to Holborn. The area corresponds roughly to the modern WC2 district. Pike-men are drilling in Lincoln’s Inn Fields. The Piazza in Covent Garden has a fence all around and a tree in the middle. At Arundel House in the Strand the long gallery that Arundel built for his collections can be seen descending towards the river, and some of the mansions along the Thames can be identified from ’Savoy staires’ on left to ’Essex staires’ on right. There is a thin border line around the view (Adapted from Pennington). 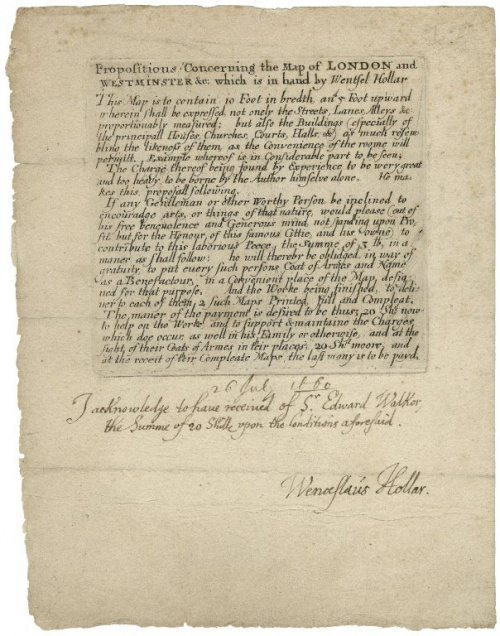 The Folger already owns the only known copy of Hollar’s prospectus for this unusual aerial view of London, Propositions Concerning the Map of London and Westminster &c. which is in hand by Wentsel Hollar, (X.d.454). The prospectus also serves as a receipt, in Hollar’s hand, "I acknowledge to have received of Sr. Edward Walker the Summe of 20 Shill[ing]es upon the Conditions aforesaid. Wenceslaus Hollar. 26 Jul. 1660." Walker undertakes to pay £3 of this sum, as outlined in the Propositions concerning the Map of London and Westminster.The map was supposed to show “the likeness” of all the buildings from above, and was the largest work ever envisioned by Hollar, even more so than his Long View of London.

But, the map was never made. The Great Fire of 1666 (September 2, 1666 – September 5) rendered much of Hollar’s seven years of preparatory work obsolete, and he could not complete the project, despite the artist’s personal appeals for a royal subvention. It was thought originally that the only surviving trace of the monumental bird’s-eye view described in the Folger prospectus was a single sheet in the British Museum, an unfinished proof of the newly-developed West End. A second copy of this proof sheet recently came to light in the collection of the Earls of Macclesfield, and was offered for sale by Maggs Bros. Ltd., London. Uniting this rare surviving print with the only known copy of its prospectus—a prospectus receipted in the artist’s own hand, no less—was an important contextual addition to our collection.

It is highly unlikely that another copy of the print will surface in the future. Only in the 18th century did printmakers begin exploiting the market for early proofs by pulling extra copies for collectors. Hollar’s proofs really were test impressions, not meant for sale. Both surviving copies were folded up at an early date, for convenient storage. They were not preserved as works of art, nor was there a market for them. Their survival, therefore, is accidental.

The Folger currently holds over 1,600 different etchings by Wenceslaus Hollar, many in multiple copies or states, bringing our total collection to well over 2,000 items. In 1996, we devoted an exhibition to the artist’s life work, Impressions of Wenceslaus Hollar. Hollar’s oeuvre is such a targeted area in our collection development that we have acquired over 200 items in the last decade, more than any other single artist in the early modern period. The Folger's collection of Hollar’s work is the largest in the United States.