Difference between revisions of "Elizabeth I: Then and Now" 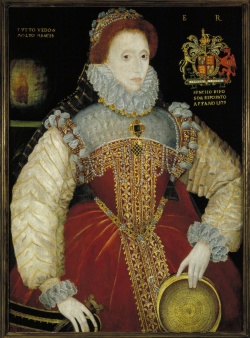 Elizabeth I: Then and Now, part of the Exhibitions at the Folger, opened on March 21, 2003 and closed on August 2, 2003. Major support for Folger exhibitions comes from The Winton and Carolyn Blount Exhibition Fund.

With her red hair, white face, and ruff, Elizabeth I is almost as familiar a figure as William Shakespeare, her contemporary. She ruled England for forty-four years—from 1558 to 1603—and this year we honor the 400th anniversary of the end of her reign with an exhibition of more than 100 rare items drawn from the Folger Shakespeare Library, the largest repository of materials by and about Elizabeth in the United States.

Elizabeth I: Then and Now was curated by Georgianna Ziegler, Louis B. Thalheimer Head of Reference at the Folger Shakespeare Library. Many will remember her 1997 Folger exhibition, Shakespeare's Unruly Women.

Her red hair, white face and ruff are almost as familiar as his bald head and beard, making Elizabeth I and Shakespeare two of the most recognizable figures from English history. Elizabeth ruled during most of Shakespeare's lifetime, and the Folgers began collecting materials about her as they focused on Shakespeare. The collection on English history has continued to expand with the Folger itself, making it today the largest repository of items by and about Elizabeth I in the United States.

Next to Shakespeare, Elizabeth I is still one of the most recognized faces from British history, whether presented in the form of Judi Dench or Whoopi Goldberg at the Oscars, on the cover of a book for CEOs, or as a Barbie doll, a bear, or a rubber-duckie.

Now in commemoration of the 400th anniversary of Elizabeth's death in 1603, the library is mounting a blockbuster exhibition featuring manuscripts, books, portraits, and other items from her reign and beyond. Highlights include the Plimpton "Sieve" portrait of Queen Elizabeth I, the Bishops' Bible from her chapel, two letters written in her own hand, a letter written by the Earl of Leicester to her at the time of the Armada, and one of the six New Year's Gift rolls in the Folger collection.

The exhibition is organized to follow the major themes of her reign from her coronation in 1559 through her progresses; her relations with Ireland, France, and Spain; her struggle with religious issues and with Mary, Queen of Scots; the splendid flowering of music and literature during her reign; and her death in 1603 with the accession of James I. But the exhibition does not stop there.

The fascination with Elizabeth by the seventeenth century and the twentieth is recorded in two cases featuring books, films, toys, and other items indicating that her "cult" has continued until today, when we admire her as a politically savvy career woman. Shakespeare wrote of Cleopatra, "Age cannot wither her, nor custom stale/ Her infinite variety," and the same might well be said of Elizabeth I.

As a woman, Elizabeth I is especially admired today for her political astuteness over a long, relatively peaceful reign, and her ability to handle a court-full of powerful men. In addition, her difficult early years, her love affairs, and her relationship with her cousin, Mary, Queen of Scots have long been part of our popular culture, celebrated in novels, biographies, and in movies from Sarah Bernhardt to Cate Blanchett.

Elizabeth I: Then and Now exhibition material

Elizabeth I: Then and Now children's exhibition

Explore Elizabeth I: Then and Now online.

Published in conjunction with the exhibition, the catalog for Elizabeth I: Then and Now is as informative as it is beautiful. Critical essays and accompanying captions address a broad range of issues including the court, entertainments, Elizabeth's men, and the social significance of her lavish wardrobe. Compiled and edited by Georgianna Ziegler with a foreword by Gail Kern Paster, Director of the Folger Shakespeare Library, and an introduction by Carole Levin. Also includes accompanying critical essays by Heidi Brayman Hackel, Peter W. M. Blayney, Janel Mueller, Sheila ffolliott and Barbara Hodgdon.

The exhibition, Elizabeth I: Then and Now, was part of a larger Elizabeth I Celebration held at the Folger in commemoration of the 400th anniversary of Elizabeth's death in 1603.

Corporate sponsors for the Elizabeth I Celebration