For Troilus and Cressida, one of William Shakespeare's plays, set during the Trojan War, Shakespeare turned to the Greek poet Homer, whose epic poems the Iliad and the Odyssey treat the war and its aftermath, and to Geoffrey Chaucer, author of The Canterbury Tales and the great romance of the war, Troilus and Criseyde.

In Homer's telling, his magnificent heroes attract the interest of the gods. Greeks and Trojans battle over Helen, wife of Menelaus, who was taken from him by Paris, a son of Priam, king of Troy, and held in the city. Chaucer’s Trojan prince Troilus and the widow Criseyde, with whom he falls in love, are fitting company for Homeric heroes. Troilus loves Criseyde even after she is sent away and accepts the Greek Diomedes as her lover. Chaucer is sympathetic to Criseyde, too, in her vulnerable state.

In sharp contrast, however, none of Shakespeare’s characters are exemplary. The leaders of the Greek army scheme to get the warrior Achilles to fight through deception and cheap theatricality. On the Trojan side, Hector argues for returning Helen to the Greeks and then, on a seeming whim, agrees to continue the war to keep her.

Unlike Chaucer’s Troilus, Shakespeare’s Troilus is self-absorbed, almost indifferent to Cressida’s plight. Shakespeare’s Cressida substitutes calculated manipulation for the thoughtful reflection of her Chaucerian predecessor. By throwing a relentlessly satirical light on Homer and Chaucer's characters, Shakespeare makes his play a savage attack on ideals that serve as cover for greed, violence, and lust.

Scholars believe that Shakespeare wrote Troilus and Cressida in 1603, or a year or two earlier. The play was published as a quarto in 1609.[1] 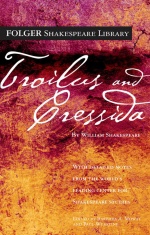 Troilus and Cressida can be read online with Folger Digital Texts and purchased from Simon and Schuster.

The Folger owns at least a dozen stand-alone translations of Troilus and Cressida in various languages (not including collected works). Cataloging of these works is ongoing as of early 2015, and many have full-level catalog records, but some works still have only partial records. Translations can be found Hamnet in by searching for "Translations"in the Genre/Form Term field, or by searching the Call Number (Left-Anchored) field for call numbers starting with PR2796 (see the list of Sh.Col. translations call numbers for specific language call numbers). Since not all translations are fully cataloged, some items may only turn up in one of these searches.

Explore the curated image group for Troilus and Cressida in the Folger digital image collection.