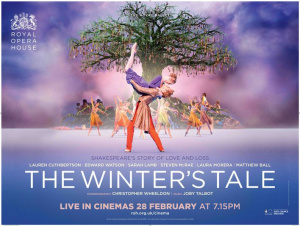 On Tuesday, April 3, 2018 as part of the Talks and Screenings at the Folger, the Folger hosted a screening of The Royal Ballet: The Winter's Tale, a live cinema broadcast from the stage of the Royal Opera House in London. The production was choreographed by Christopher Wheeldon with music by Joby Talbot

Christopher Wheeldon, Artistic Associate of The Royal Ballet, created his adaptation of Shakespeare’s late great romance The Winter’s Tale for The Royal Ballet in 2014. Building on the success of Alice’s Adventures in Wonderland, The Winter’s Tale received ecstatic praise at its premiere, acclaimed by critics and audiences alike for its intelligent, distinctive and emotionally powerful story, told through exquisite dance. It is now widely judged to be a modern ballet classic.

The story follows the destruction of a marriage through consuming jealousy, the abandonment of a child and a seemingly hopeless love. Yet, through remorse and regret – and after a seemingly miraculous return to life – the ending is one of forgiveness and reconciliation. With powerful designs by Bob Crowley and atmospheric music by Joby Talbot, The Winter’s Tale is a masterful modern narrative ballet.

For more information on the production, visit the Royal Opera House archives here.