The Festive Renaissance: Illustrated Books from the Colt Collection 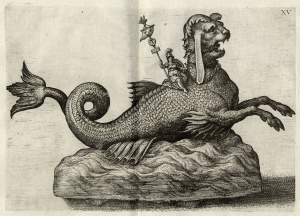 The Festive Renaissance: Illustrated Books from the Colt Collection was part of the Exhibitions at the Folger, and opened on October 26, 1995, and closed on March 14, 1996. A limited edition companion catalog was published in conjunction with the exhibition.

Among the Folger's immense holdings of early illustrated books, few are as spectacular as those which commemorate the great events of the noble and royal life cycle—births, weddings, coronations, royal entries, and funerals. Drawing exclusively upon the magnificent volumes given to the Library since 1975 by Mrs. H. Dunscombe Colt, this exhibition provided an overview of early modern ceremonies, festivities, and processions, both English and continental, and offered striking panoramas of popular as well as aristocratic urban life in pre-Revolutionary Europe.

Festival books preserve an invaluable record—albeit not always a completely reliable one—of extravagant public spectacles. While such books were devoted to the activities of a social elite, they offer many insights into the social history of broader urban populations. Their illustrations, many of which are significant works of art, give knowing evidence of the urban poor, the beggar at the gates, the hungry spectator at the margins of the feast, the menial workers who made it all happen.

The Festive Renaissance offered the viewer thirty-nine rare and beautiful examples of the bookmaker's art. Royal marriages, births and baptisms, tournaments, pageants, state visits, inaugurations, and funerals, and the festivities celebrating them, were commemorated in volumes printed between 1549 and 1768. Given the centrality of these events to the public life of early modern societies, it is obvious why historians and cultural anthropologists find such material of absorbing interest.