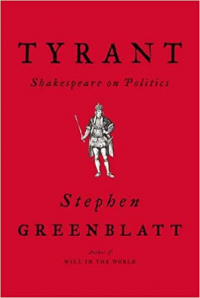 Stephen Greenblatt: Tyrant, one of the Talks and Screenings at the Folger, was held in the Elizabethan Theatre on Saturday, May 6, 2018 at 2:00pm.

At this event, author Stephen Greenblatt read and discussed his new book, Tyrant: Shakespeare on Politics (released May 8, 2018).

In making pointed use of historical figures from Henry VI to Richard III and painting his unforgettable portraits of failing leaders—a mad Lear, a treacherous Macbeth, a vengeful Coriolanus—William Shakespeare delved into the lust for absolute power and the darkest aspects of its execution. With uncanny insight, he shone a spotlight on the infantile psychology and unquenchable narcissistic appetites of demagogues and imagined how they might be stopped. By violence, with even more destructive outcomes? Or through the patient work of grubby politics? On all of these subjects, Shakespeare’s work speaks to us today.

Copies of Tyrant were available for purchase and signing at the event. 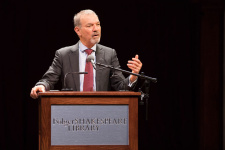 Stephen Greenblatt is John Cogan University Professor of the Humanities at Harvard University. He is the Pulitzer Prize- and National Book Award-winning author of The Swerve, Will in the World, and The Rise and Fall of Adam and Eve, and the general editor of The Norton Shakespeare.