This article is related to the exhibition. For other uses, see Shakespeare's Sisters (disambiguation).

This article collects the children's exhibition material featured in the Shakespeare's Sisters: Voices of English and European Women Writers 1500-1700 exhibitions. 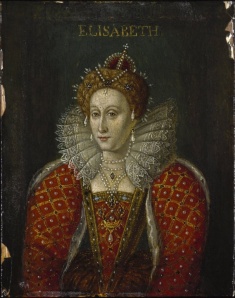 During the Renaissance, many people—men and women alike—did not know how to read and write. However, some women did learn how to read, and a number of women wrote books, plays, and poetry that we still learning about today.

In England, women did not write plays when Shakespeare was alive. However, in the late 1600s, many women began writing plays, and many of these plays became popular in London theaters and elsewhere.

Aphra Behn was one of the first women in England to write plays and earn a living doing it. Before writing plays, she worked as a spy for King Charles II! King Charles often did not pay her for her work, so imaginative Aphra decided to make money writing plays.

Catherine Trotter had her first book published when she was 14! Two years later, her first published play, Agnes de Castro, was performed on stage. Catherine wrote 4 more plays, and many books and articles.

In addition to writing plays, Susanna Centlivre was also a poet and actress. She based characters in her play The Basset Table (retitled The Gaming Table) off of real-life people in London, including the famously beautiful Hortense Mancini, who hosted card games at her house.

Poetry was very popular in the 1500s and 1600s. Although men wrote most of the the poetry published in England during this time, a few English women became famous as poets. In France and Italy, women also wrote poetry. In fact, women in Italy began writing and publishing love poems much earlier than women in England! Sometimes, books of poetry that included poems by both men and women were published in Italy.

Lady Mary Sidney became famous as a translater of the Psalms, a series of religious poems in the Bible. She also helped to publish her brother Philip Sidney's masterpiece Arcadia, a sensational story of diguises, kidnappings, and princes and princesses.

Elizabeth Jane Weston began writing poetry as a teenager, including verses in Latin. Although she was born in England, Elizabeth spent most of her life living in Prague, where her stepfather was a scientist and alchemist. Her collections of poetry became famous throughout Europe.

Katherine Philips, a contemporary of the playwright Aphra Behn, was well-known during her lifetime as one of England's leading female poets. Her friends and admirers called her by the nickname "Orinda."

Aemilia Lanyer wrote and published poetry, and lived in London at the same time as William Shakespeare. In addition to writing poetry, she also ran a school in London.