This article is about the exhibition. For other uses, see Shakespeare's Sisters (disambiguation).

Shakespeare’s Sisters: Voices of English and European Women Writers, 1500-1700, part of the Exhibitions at the Folger, opened on Feburary 3, 2012 and closed on May 20, 2012. Shakespeare's Sisters takes its title from a famous passage in Virginia Woolf’s book A Room of One’s Own (1929), in which Woolf imagines a gifted sister of William Shakespeare, completely thwarted by the social restrictions of his day. Drawing on the breadth and depth of the Folger collection, with additional rare materials from other institutions, Shakespeare’s Sisters presents a far more complex—and fascinating—reality.

The works of more than 50 sixteenth- and seventeenth-century women writers from England and continental Europe, writing in formats that range from poems, prose fiction, and memoirs to translations, plays, and more, were brought together. In all, scholars in recent decades have identified and studied hundreds of women writers from the early modern age.

Shakespeare's Sisters was curated by Georgianna Ziegler, Louis B. Thalheimer Head of Reference at the Folger Shakespeare Library. 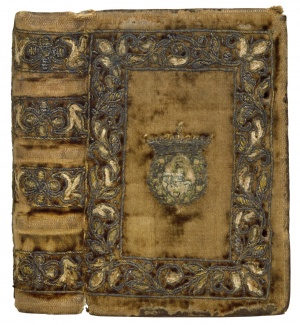 "I've been interested for years in early women writers," says Ziegler. "It's been something new and exciting in early modern studies over the past 30 to 40 years, a whole new area to find and develop. In the past, women hadn't received much attention from scholars of the early modern era, but then in the 1980s and 1990s, there was a lot of archival work to find writing by early modern women writers. Now we're into a new generation, where young scholars write secondary works about what has been found. But the digging goes on, too. And scholars come to the Folger to do this research."

"I hope visitors to the exhibition come away excited by the idea of all of these women writers at an early time," she says. "Most people aren't aware of how many there were and how varied their writings were"—and not just in England. "I wanted to include continental writers, too," she says, including Italian, French, and other women authors, playwrights, and poets, whose works are well represented in the Folger's large continental collection.

Among Ziegler's many favorites in the exhibition are the small, stunningly bound books of Psalms by calligrapher Esther Inglis. "I have always liked those calligraphic books," she says. "I've written about Inglis before, and I also wrote the entry about her in the Biographical Dictionary of Scottish Women."

The Inglis books are typical of the exhibition in another way. "As I pulled the books for the exhibition, a pattern emerged: many were tiny or small. These are books of poems, Psalms, and plays, which you would expect to be in a small format. Even the Italian women's heroic romance tales are often small. The topics tend to be personal. The rare collection of Marguerites or poems by Queen Marguerite of Navarre, which we have on loan, is beautiful and it fits in your hand. As a queen, she could have afforded a larger book. That's also true of Queen Katherine Parr's book of prayers, which is in the exhibition, too. To me, the size suggests intimacy."

One of the exceptions to the rule is a large volume of plays by Margaret Cavendish, Duchess of Newscastle—a rare book that also produced a surprise. As the Cavendish book was being prepared for the exhibition, a previously hidden inscription was uncovered: "Mary [last name illegible], Her Booke Giuen by her Grace the Duches of Newcastle." As Ziegler explains, "We knew that Cavendish gave her books to friends with her corrections to the text in them." Before finding the inscription, however, "we never thought the notes in this copy were her own. Now we have to check to see if they were. We are trying to identify 'Mary,' too, although an ultraviolet (UV) photograph didn't make her last name readable." And so, in Ziegler's phrase, the "digging" into the rich subject of early modern women writers continues on.

What would have happened had Shakespeare had a wonderfully gifted sister, called Judith, let us say ...

... it takes little skill in psychology to be sure that a highly gifted girl who had tried to use her gift for poetry would have been so thwarted and hindered ... that she would have lost her health and sanity.

– Virginia Woolf, A Room of One's Own

Virginia Woolf' held a grim view of women's writing during the age of Shakespeare, in large part because she was entirely unaware of just how many women were writing. Woolf was aware of a few early women writers, but she had no idea how many women actually were writing, because many of their works circulated in manuscript and were never published. Among the women she read about were seventeenth-century diarist and historian Lady Anne Clifford, the women of the French Salons, and Mary Sidney and Mary Wroth. But others—women writing about love and heroic romances; women writing plays to be read and performed; women translating religious works—these she did not know of. As the exhibition explores the work of these women, from Mary Sidney and Laura Battiferri, and Louise Labé to Aphra Behn, it challenges Woolf ’s notion that women were unable to rise above their gender to create lasting works.

In recent decades, modern scholars have discovered or rediscovered many works that lay critically neglected for years. In the article Scholars' insights, these scholars give their insights into the rich literary lives of the women who truly were Shakespeare's sisters.

This article offers modern scholars' insights into the rich literary lives of the women featured in the Shakespeare's Sisters exhibition.

Explore Shakespeare's Sisters online, or on an audio tour.

This link offers a list of programs which celebrated 1,000 years of women writers in tandem with the Shakespeare's Sisters exhibition.

This Annotated bibliography of readings related to Shakespeare's Sisters is not meant to be comprehensive but to provide at least one modern edition and one fairly recent biography for each author, when such is available. In many cases, modern editions of the works contain good biographical introductions. Though there are many excellent works in other languages, this list focuses on books in English for purposes of accessibility.

Listen to curator Georgianna Ziegler describe her development of the exhibition, and her fascination with Early Modern female writers, in this opening lecture, delivered on February 6, 2012.

Watch an introduction to the exhibition.