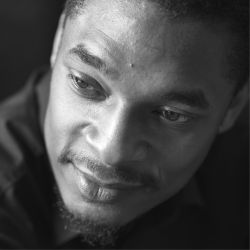 Terrance Hayes's numerous volumes include American Sonnets for My Past and Future Assassin, Lighthead (National Book Award in Poetry), Wind in a Box (Pushcart Prize), and Muscular Music (Kate Tufts Discovery Award). To Float in the Space Between, his collection of texts and drawings inspired by the work of Etheridge Knight, has garnered the Poetry Foundation’s 2019 Pegasus Award in Poetry Criticism. He has received many honors and awards, including fellowships from the National Endowment for the Arts and the Guggenheim Foundation and in 2014, a MacArthur fellowship.

Riffs and Relations: African American Artists and the European Modernist Tradition presented works by African American artists of the 20th and 21st centuries together with works by the early 20th century European artists with whom they engaged. This exhibition connected artists such as Romare Bearden with Pablo Picasso; Renee Cox and Robert Colescott with Édouard Manet; Norman Lewis with Wassily Kandinsky, and Leonardo Drew with Piet Mondrian. Black artists have investigated, interrogated, invaded, entangled, annihilated, or immersed themselves in the aesthetics, symbolism, and ethos of European art for more than a century. The powerful push and pull of this relationship constitutes a distinct tradition for many African American artists who source the master narratives of art history to critique, embrace, or claim their own space. Riffs and Relations explored how blackness has often been conceived from the standpoint of these international connections and presented the divergent and complex works born of these dialogues.

…I lock you in an American sonnet that is part prison,

I lock you in a form that is part music box, part meat

Grinder to separate the song of the bird from the bone.