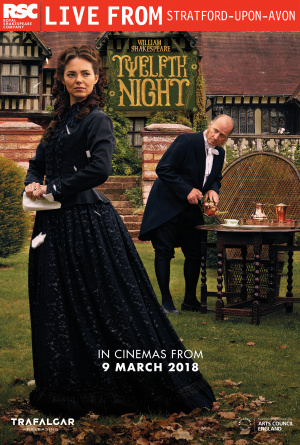 On Monday, April 9, 2018 as part of the Talks and Screenings at the Folger, the Folger hosted a screening of RSC Live: Twelfth Night, a live cinema broadcast from the stage of the Royal Shakespeare Company, captured from Shakespeare's hometown of Stratford-upon-Avon, in their own Elizabethan Theatre. The production was directed by Christopher Luscombe.

Twelfth Night is a tale of unrequited love – hilarious and heartbreaking. Two twins are separated in a shipwreck, and forced to fend for themselves in a strange land. The first twin, Viola, falls in love with Orsino, who dotes on OIivia, who falls for Viola but is idolised by Malvolio. Enter Sebastian, who is the spitting image of his twin sister...

Director Christopher Luscombe chose a late Victorian setting for his visually rich production which appealed to both the critics and the audience. Simon Higlett's splendid set designs included railway stations, opulent hothouses, wood-panelled halls as well gardens complete with fountains and statuary. Nigel Hess composed some lively tunes with a hint of Gilbert and Sullivan to enhance the gaiety.