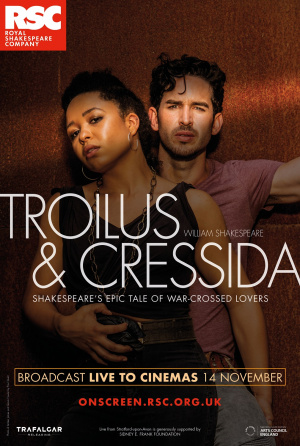 On Tuesday, February 5, 2019 as part of the Talks and Screenings at the Folger, the Folger hosted a screening of RSC Live: Troilus and Cressida, a live cinema broadcast from the stage of the Royal Shakespeare Company, captured from Shakespeare's hometown of Stratford-upon-Avon, in their own Elizabethan Theatre. The production was directed by RSC Artistic Director Gregory Doran and starred Gavin Fowler and Amber James in the title roles.

Troilus and Cressida swear they will always be true to one another. But in the seventh year of the siege of Troy their innocence is tested, and exposed to the savage corrupting influence of war, with tragic consequences.

The Greek army is encamped under the walls of Troy and, at the point at which the play begins, the war has reached stalemate. The Greeks are quarreling amongst themselves. Achilles, their greatest champion, refuses to fight and has withdrawn to his tent with his lover, Patroclus. Equally at odds with themselves, the Trojans are debating the value of continuing the war merely for the sake of keeping Helen.

Virtuoso percussionist Evelyn Glennie collaborated with the artistic team to create a satirical futuristic vision of a world resounding with the rhythm of battle.