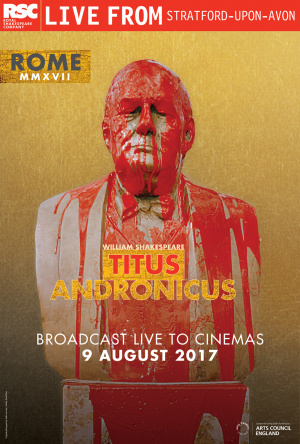 On Monday, September 18, 2017 as part of the Talks and Screenings at the Folger, the Folger hosted a screening of RSC Live: Titus Andronicus, a live cinema broadcast from the stage of the Royal Shakespeare Company, captured from Shakespeare's hometown of Stratford-upon-Avon, in their own Elizabethan Theatre. The production was directed by Blanche McIntyre and starred David Troughton in the title role.

The decay of Rome reaches violent depths in Shakespeare’s bloodiest play. Titus is a ruler exhausted by war and loss, who relinquishes power but leaves Rome in disorder. Rape, cannibalism and severed body parts fill the moral void at the heart of this corrupt society. Shakespeare’s gory revenge tragedy presents us with murder as entertainment, and, as the body count piles up, poses questions about the nature of sexuality, family, class and society.