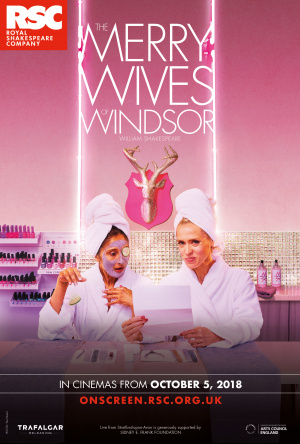 On Tuesday, November 6, 2018 as part of the Talks and Screenings at the Folger, the Folger hosted a screening of RSC Live: The Merry Wives of Windsor, a live cinema broadcast from the stage of the Royal Shakespeare Company, captured from Shakespeare's hometown of Stratford-upon-Avon, in their own Elizabethan Theatre. The production was directed by Fiona Laird and starred David Troughton as Falstaff.

Sir John Falstaff plans to hustle his way to comfortable retirement by seducing the wives of two wealthy men. But it’s the women of Windsor who pull the strings and in a world of wealth, glamour and ‘well jel’ wives, they finally tell Sir John to ‘shut up’. The only way is Windsor in this outrageous and fun-filled new version of Shakespeare's hilarious comedy.