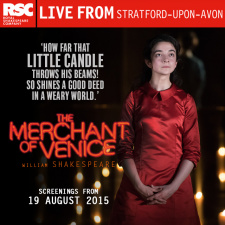 On Saturday, September 12, 2015 as part of the Talks and Screenings at the Folger, the Folger hosted a screening of RSC Live from Stratford-upon-Avon: The Merchant of Venice, a live cinema broadcast from the stage of the Royal Shakespeare Company, captured from Shakespeare's hometown of Stratford-upon-Avon, in their own Elizabethan Theatre. The production was directed by Polly Findlay.

In the melting pot of Venice, trade is God. With its ships plying the globe, the city opens its arms to all, as long as they come prepared to do business and there is profit to be made. With the gold flowing all is well, but when a contract between Bassanio and Shylock is broken, simmering racial tensions boil over. A wronged father, and despised outsider, Shylock looks to exact the ultimate price for a deal sealed in blood.