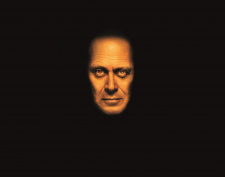 On Monday, June 5, 2017 as part of the Talks and Screenings at the Folger, the Folger hosted a screening of RSC Live: Julius Caesar, a live cinema broadcast from the stage of the Royal Shakespeare Company, captured from Shakespeare's hometown of Stratford-upon-Avon, in their own Elizabethan Theatre. The production was directed by Angus Jackson, with Andrew Woodall as Caesar and Alex Waldmann as Brutus.

Caesar returns from war, all-conquering, but mutiny is rumbling through the corridors of power. The politics of spin and betrayal turn to violence in Shakespeare’s epic political tragedy, as the race to claim the empire spirals out of control.