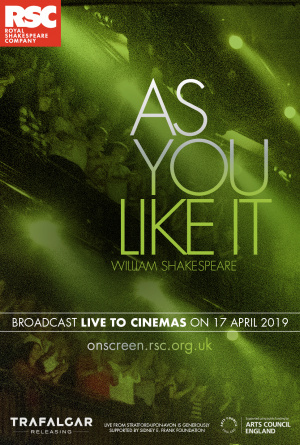 On Monday, May 13, 2019 as part of the Talks and Screenings at the Folger, the Folger hosted a screening of RSC Live: As You Like It, a live cinema broadcast from the stage of the Royal Shakespeare Company, captured from Shakespeare's hometown of Stratford-upon-Avon, in their own Elizabethan Theatre. The production was directed by Kimberley Sykes and starred Lucy Phelps as Rosalind.

Rosalind is banished, wrestling with her heart and her head. With her cousin by her side, she journeys to a world of exile where barriers are broken down and all can discover their deeper selves. Kimberley Sykes returned to the RSC to direct this riotous, exhilarating version of Shakespeare's romantic comedy.