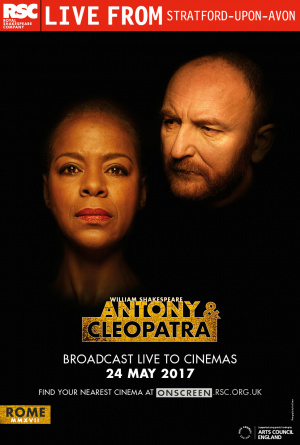 On Monday, July 17, 2017 as part of the Talks and Screenings at the Folger, the Folger hosted a screening of RSC Live: Antony and Cleopatra, a live cinema broadcast from the stage of the Royal Shakespeare Company, captured from Shakespeare's hometown of Stratford-upon-Avon, in their own Elizabethan Theatre. The production was directed by Iqbal Khan and starring Antony Byrne as Antony and Josette Simon as Cleopatra.

Shakespeare’s tragedy of love and duty, picks up the Roman saga where Julius Caesar ends. Following Caesar’s assassination, Mark Antony has reached the heights of power. Now he has neglected his empire for a life of decadent seduction with his mistress, Cleopatra, Queen of Egypt. Torn between love and duty, Antony’s military brilliance deserts him, and his passion leads the lovers to their tragic end.