Off with His Head: the 370th Anniversary of the Execution of Charles I

Off with His Head: the 370th Anniversary of the Execution of Charles I, a pop-up exhibition at the Folger, took place on January 29 and 30, 2019, from 11am to 1pm each day in the Founder's Room. It was curated by Beth DeBold, Assistant Curator of Collections.

Off with His Head was a two-day pop-up focused on the events surrounding the conflicts that took place during the English Civil Wars (primarily the events of 1642-1649, although the civil wars continued through 1651). It was divided into two parts. The pop-up on January 29 focused on the Civil War conflicts themselves, and the pop-up on the 30th examined the actual trial and execution of the king.

The exhibition labels for January 29 and January 30 and the flyer are available for download as PDF files. 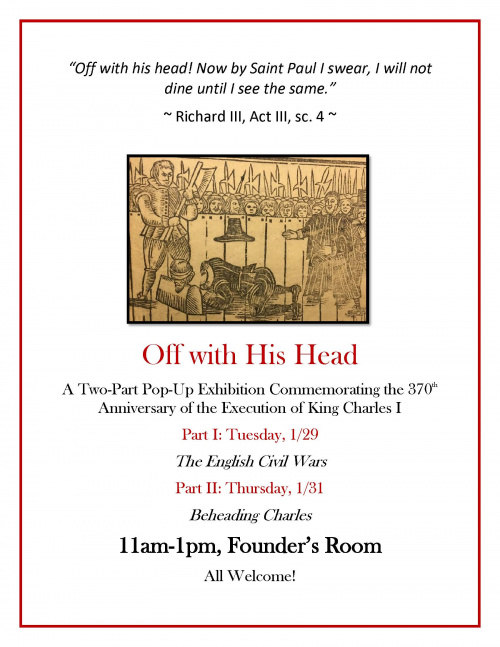 1). England and Wales. Sovereign (1625-1649 : Charles I).
A declaration of the true causes which moued His Maiestie to assemble, and after inforced him to dissolue the two last meetings in Parliament.
London : Bonham Norton and John Bill, 1626.
Call Number: STC 9246


Charles I dissolved Parliament several times during his reign due to his displeasure with what he viewed as their impositions on his sovereign authority—one of the many factors that lead to the exacerbation of conflict. Between 1629 and 1640, he refused to call a Parliament, effectively ruling alone. This period is known as “The Personal Rule.”


One of the main points of contention between Charles and his Parliaments was his constant levying of “ship money” taxes. “Ship money” was originally a medieval taxation on coastal towns and villages, where the inhabitants were required to reimburse the Crown for the full cost of the naval ships protecting them from foreign attack. Ship money was one of the few taxes that could be levied by the Crown without permission of Parliament—Charles I abused this privilege, invoking it often and expanding it further inland, drawing the ire of his government.


Just like today, early modern people had lots of opinions, and engaging in political discourse was challenging and often frustrating. This is an example of a satirical pamphlet produced near the beginning of the first English Civil War—"rattle-heads” was a derogatory term for royalists or cavaliers, called so because their opponents claimed their heads were empty. “Round-heads” were supporters of Parliamentary representatives, called so because many of the Puritans in Parliament favored short, rounded haircuts, as opposed to the longer hairstyles worn by the aristocracy and the king).


4). England and Wales. Parliament. House of Commons.
A remonstrance of the state of the kingdom.
London: Joseph Hunscutt, 1641
Call Number: Wing E2221A copy 1


In 1640, due in part to wars in Scotland, Charles was forced to finally call a Parliament. The first he quickly dissolved after only three weeks, but was again forced to call for a Parliament later in the year due to the pressing need to pass financial legislation. Called the “Long Parliament,” the representatives quickly passed legislation stipulating that they could not be dissolved except by agreement of the members. Among other actions, they issued this official rebuke, known popularly as The Great Remonstrance, which outlined all of their grievances with Charles. The Parliament sat from 1640-1648, when it was forced to dissolve by the New Modal Army.


Charles attempted to reinforce his authority, relying on rhetoric that established him as the center of government and a father figure to his people. This pamphlet prominently features his coat of arms.


By 1642 it was clear that war was inevitable. Calls for peaceful resolution such as this were published, but had no effect. In January, Charles attempted to arrest several parliamentary members for treason, and in March, Parliament seized control of the militia. By September, they were engaging in open warfare.


These amazing portraits are from the same engraved copper plate—although based on a portrait of Charles I by Anthony van Dyck, the plate was initially engraved as a portrait of Cromwell, and was later altered to show Charles again.


One of the most famous political works in English history, Leviathan was written during the English Civil War and defends the idea of the monarchy. The frontispiece, by the engraver Abraham Bosse, depicts a king as being made up of the physical bodies of his people—a powerful piece of royalist rhetoric. It was published in 1651, two to three years after Charles lost his head.

January 30: the Trial and Execution of Charles I


Katharine Whetstone Jones was the sister of Oliver Cromwell, who was in 1649 a member of Parliament and one of the signatories of King Charles I’s death warrant. His sister in her letter sounds less certain of the political decisions of the day, writing to her cousin Mrs. Wind, “allass deare cousin, I am very darke & knowe not what to Judge of sutch high things they are farr above my capasitye, I confess I was verye much troubled at that strooke, which tooke the head of this poore Kingdome from us, & trulye had I bin able to have purchased his life, I am confident I cowld with all willingness have layd downe mine…they saye I am a royallist the Lord make mee what hee will have mee to bee…”

Almost instantly following his execution, Charles was made into a martyr for England by his supporters. The allegorical frontispiece depicts the king in his martyrdom, holding a crown of thorns with his eyes set on a martyr’s crown. Palm leaves, traditional symbols of martyrs, appear in the background. The text is meant to take the form of Charles’s diary (although it is uncertain whether it was written by him), and both justifies the king’s actions during the civil war and compels his people to forgive his executioners. It is a masterful piece of royalist propaganda. The book was published ten days after his execution, and was extremely popular, despite formal disapproval from the government.

This sammelband, assembled and rebound in the 19th century, contains seven texts and multiple engravings (some of later origin) of Charles I at the time of his trial and execution. This title page, which is the only portion remaining of the pamphlet, shows a rough woodcut of the moment of execution. Executioners, or “hangmen” as they were often known despite executing people in various ways, provoked a great deal of uneasiness and anxiety in the early modern period. On the one hand, the executioner was the mechanism of justice: on the other hand, he was an individual carrying out a murder, and was regarded as unclean. In the case of the execution of a royal body, the anxiety is particularly palpable. Several pamphlets from the period purport to give the executioner’s confession, and discuss his personal repentance and anxiety that his actions were wrong.


Published in the year of Charles II’s ascension to the throne and the restoration of the monarchy in England, this book purports to document the years immediately leading up to the Civil Wars, followed by the Interregnum. In this opening, which shows the text of the formal charges levied against Charles I, an early modern owner has written the names of the regicides (king killers) in the margins. In the back, he notes the fates of some of the Parliamentarians in 1659, including “dyed in the Tower” and “Hangd & Quarterd.”

William Lilly was an astrologer and producer of almanacs—to some he was an “English Merlin,” while to his enemies, he was a “juggling wizard and imposter.” Whichever you believe, it is undeniable that his “prognostications” were extremely popular, and he produced this pamphlet discussing the astrological signs as they pertained to the king’s potential execution early in 1649. Like every good conman he makes no firm predictions, but hopes that the monarchy will be regulated instead of destroyed.

Foreign reaction to the king’s execution was widespread—-this Italian pamphlet was apparently translated from a Dutch pamphlet which had been translated from an English pamphlet, but neither of these publications has been identified. The woodcut shows a more sinister, fictional version of the execution, where a sleeping Charles is stabbed in the back.

This pamphlet reproduces Charles’s final speech on the scaffold, and relates his walk from St James’s Palace to Whitehall, where he was to be executed. Ranks of soldiers stood between the king and the spectators, and so his final words went mostly unheard except by those on the platform with him. Pamphlets such as this one helped to inform citizens about what he had said, but also provided a way for both Parliamentarians and royalists to spread their own propaganda.


8b). Anonymous
A perfect narrative of the whole proceedings of the High Court of Iustice in the tryal of the King in Westminster Hall...
London: John Playford, 1648 [i.e. 1649] Call Number: Wing W9

Charles was captured in the summer of 1648, but debate over how to proceed kept him under house arrest until late that same year. He attempted to negotiate, but many among his opposition were divided. The idea of trying a king was uncomfortable—he was ultimately accused of treason for pursuing his own personal interests over the good of the country, and his opponents framed kingship as an office “whose every occupant was entrusted with a limited power to govern by and according to the laws of the land and not otherwise.” Charles continued to insist on his divine right to rule as he wished, and invoked the doctrine of sovereign immunity. He was tried in January and condemned to death on January 26th.