The O.B. Hardison Poetry Series presented Mother Tongue: Poetry in Translation: Adam Zagajewski, Clare Cavanagh, Edward Hirsch on March 16, 2015, at 7:30 pm in the Folger's Elizabethan Theatre. In this bilingual reading, co-sponsored by the Poetry Society of America, Polish poet Adam Zagajewski read alongside his translator, Clare Cavanagh, followed by a conversation moderated by Edward Hirsch. Poet Mary Oliver once called Zagajewski “our greatest and truest representative, the most pertinent, impressive, meaningful poet of our time.” 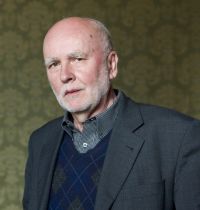 Adam Zagajewski's themes “are the night, dreams, history and time, infinity and eternity, silence and death.” The titles of his collections of poetry suggest some of these concerns: Tremor (1985), Mysticism for Beginners (1997), and World Without End: New and Selected Poems (2002). Zagajewski’s prose collections include Two Cities: On Exile, History and the Imagination (1995) and the 2000 memoir Another Beauty. Zagajewski has won the Prix de la Liberté as well as fellowships from the Guggenheim Foundation and the Berliner Kunstleprogramm.

Clare Cavanagh is the author of Lyric Poetry and Modern Politics: Russia, Poland, and the West (2010), winner of the National Book Critics Circle Award in Criticism. Other works of scholarship include Osip Mandelstam and the Modernist Creation of Tradition (1995), which received the AATSEEL Prize for Outstanding Scholarly Book in Slavic Literature.

Edward Hirsch was nominated for the National Book Critics Circle Award for his first volume, For the Sleepwalkers (1981); his second, Wild Gratitude (1986) won the award in 1987. He has been awarded fellowships from the National Endowment for the Arts, the Guggenheim Foundation, and received a MacArthur “Genius Grant” in 1997. His numerous other awards include an Ingram Merrill Foundation Award, the Rome Prize from the American Academy in Rome, and a Lila Wallace-Reader’s Digest Writers’ Award. A former professor at Wayne State University and the University of Houston, Hirsch is president of the John Simon Guggenheim Memorial Foundation and is a Chancellor of the Academy of American Poets.

From Wait For An Autumn Day

Wait for an autumn day, for a slightly

for chestnuts and acorns,

for an evening when you sit in the garden

with a notebook and the bonfire’s smoke contains

the heady taste of ungettable wisdom....

From Eternal Enemies © 2008 by Adam Zagajewski, translated by Clare Cavanagh, published by Farrar, Straus, and Giroux. Used with permission.