Maxine Kumin has read for the O.B. Hardison Poetry Series on two occasions: December 6, 1979, and on December 8, 1992 for the Emily Dickinson Birthday Tribute. Her poem "Sonnets Uncorseted," on the prolific seventeenth-century poet and author Margaret Cavendish, was also included in a chapbook inspired by, and titled after, Shakespeare's Sisters: Voices of English and European Women Writers, 1500-1700, part of the Exhibitions at the Folger. 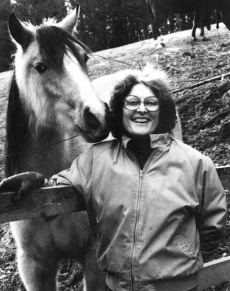 Kumin’s work explores with warmth and wit humanity’s place in the animal world. Author of thirteen volumes of poetry including Bringing Together, The Long Marriage, and Looking for Luck, Kumin won the 1973 Pulitzer Prize for Up Country: Poems of New England. She has been Poet Laureate of New Hampshire and the Poet Laureate Consultant in Poetry at the Library of Congress from 1981 to 1982.

Hear her poem "Encounter in August" at her Emily Dickinson Birthday Tribute Reading in December 8, 1992.