Harjo read for the O.B. Hardison Poetry Series on December 11, 2000 for the Emily Dickinson Birthday Tribute and on March 24, 2014 for Making Your Own Map: Joy Harjo and Evie Schockley (2014). 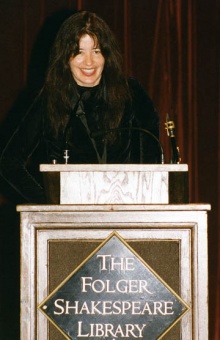 A member of the Muscogee Tribe, Joy Harjo is the author of six collections of poetry, most recently How We Became Human: New and Selected Poems and including A Map to the Next World: Poems, The Woman Who Fell From the Sky, which received the Oklahoma Book Arts Award, and In Mad Love and War, which received an American Book Award and the Delmore Schwartz Memorial Award. “I turn and return to Harjo’s poetry for her breathtaking complex witness and for her world-remaking language: precise, unsentimental, miraculous,” notes Adrienne Rich. Harjo began playing the saxophone in an attempt to combine elements of tribal music, jazz, and rock with poetry. She performs poetry and plays saxophone with her band, Poetic Justice. Her many honors include The American Indian Distinguished Achievement in the Arts Award, the William Carlos Williams Award, a Lifetime Achievement Award from the Native Writer’s Circle of the Americas, and fellowships from the Witter Bynner Foundation and the National Endowment for the Arts.

Listen to Joy Harjo perform Emily Dickinson's "I am Nobody! Who are You?"

Listen to Harjo introduce and read her poem "Perhaps the World Ends Here" at the Folger on December 11, 2000.