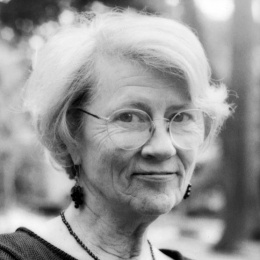 Since winning the Yale Younger Poets prize in 1965, Valentine has published eight collections of poetry, including The Cradle of the Real Life (2000), to high critical acclaim. Her spare, sharp-edged poems approach Dickinson’s in their risky line-breaks and cosmic ambition, but with an earthiness all their own: “I want, I want. / I want to become round like you there: like God,” she writes.

Listen to her read her poem "Elegy for Jane Kenyon" at the Folger on December 8, 2003.