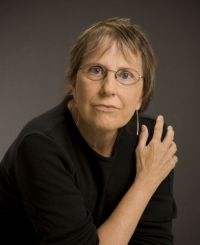 Rae Armantrout is the Pulitzer Prize-winning author of a dozen books of poetry, including Itself, Money Shot, Versed, Next Life, and Veil: New and Selected Poems. In 2009 she received the National Books Critics Circle Award. Armantrout has also published a short memoir, True, and her Collected Prose was published in 2007. She is a professor emerita at University of California, San Diego, where she taught for more than 20 years and was the longtime director of the New Writing Series.