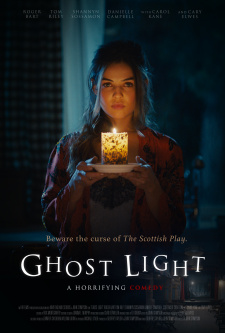 On Monday, June 17, 2019 as part of the Talks and Screenings at the Folger , the Folger hosted a the DC premiere of the film, Ghost Light, a new dark comedy by John Stimpson and Geoffrey Taylor.

In this delightfully spooky film, the legendary curse of Macbeth comes furiously to life when a disgruntled understudy shouts "Mac…" er, the name of "The Scottish King" on an empty stage. The comically inept troupe of traveling Shakespeareans who suffer the consequences include Roger Bart, Cary Elwes, Carol Kane, Tom Riley, Shannyn Sossaman, and Danielle Campbell. All's well that ends well… but not for everyone!

Winner of jury awards at the Austin and Woodstock Film Festivals, and the audience award at the Oxford Film Festival.

Following the screening, the film's creators John Stimpson and Geoffrey Taylor participated in a moderated conversation and Q&A.