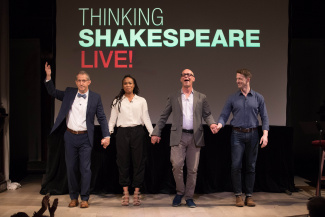 Free Folger Friday: Thinking Shakespeare with Barry Edelstein, one of the Talks and Screenings at the Folger, was held in the Elizabethan Theatre on Friday, June 1, 2018 at 5:30pm.

Thinking Shakespeare Live was a 90-minute exploration of the language of Shakespeare. This special program based on Barry Edelstein’s book, Thinking Shakespeare: A How-To Guide for Student Actors, Directors, and Anyone Else Who Wants to Feel More Comfortable with the Bard. Led by Barry Edelstein and assisted by actors Zach Appelman, Louis Butelli and Antoinette Robinson, the event explored a performer’s approach to Shakespearean language, through an entertaining behind-the-scenes look at the creative process. 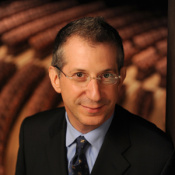 Barry Edelstein is the Erna Finci Viterbi Artistic Director of The Old Globe in San Diego. Recognized as one of the leading American authorities on the works of Shakespeare, he has directed nearly half of the Bard’s plays. As Director of the Shakespeare Initiative at The Public Theater (2008-2012), Edelstein oversaw all of the company’s Shakespearean productions, as well as its extensive educational, community outreach, and artist-training programs. He was also Associate Producer of The Public’s Broadway production of The Merchant of Venice starring Al Pacino. From 1998-2003 he was Artistic Director of Classic Stage Company, where he produced and directed some of New York’s most memorable classical productions. Edelstein has taught Shakespearean acting at The Juilliard School, NYU’s Graduate Acting Program, and the University of Southern California. His book Thinking Shakespeare (called by New York Magazine “a must-read for actors”) was published in 2007 and is now the standard text on American Shakespearean acting. He is also the author of Bardisms: Shakespeare for All Occasions.