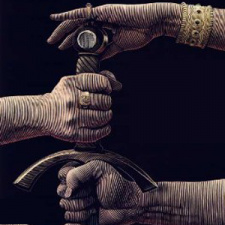 Free Folger Friday: The Lion in Winter , one of the Talks and Screenings at the Folger, was held in the Elizabethan Theatre on Friday, November 16, 2018 at 5:30pm.

At this free staged reading, local actors read selected scenes from James Goldman's play, The Lion in Winter. The reading was directed by Pete Danelski, and presented alongside the Folger Theatre production of King John.

It's Christmas 1183, and King Henry II us planning to announce his successor to the throne. The jockeying for the crown, though, is complex. Henry has three sons and wants his boy Prince John to take over. Henry's wife, Queen Eleanor, has other ideas. She believes their son Prince Richard should be king. As the family and various schemers gather for the holiday, each tries to make the indecisive king choose their option.