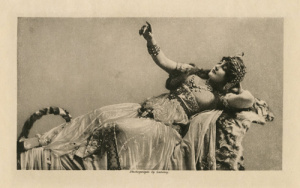 Free Folger Friday: The Imaginary Cleopatra, one of the Talks and Screenings at the Folger, was held in the Folger Theatre on Friday, November 17, 2017 at 6:00pm.

From Roman times onward, the "idea" of Cleopatra, or the "imaginary" Cleopatra, has been manipulated as a means to discuss contemporary political issues and anxieties. At this event, Dr. Jacquelyn Williamson of George Mason University discussed Cleopatra in the ancient Roman imagination, which informed Shakespeare's play. She focused on American films, discussing their use of the imaginary Cleopatra as created by the Romans and Shakespeare, looking at Theda Bara, Claudette Colbert, and Elizabeth Taylor, whose performances play out a variety of fears about gender and sexuality. 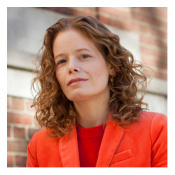 Dr. Jacquelyn Williamson is an Egyptologist, with a special focus on gender and religious power. Her book, Nefertiti’s Sun Temple: A New Cult Complex at Tell el-Amarna, part of Brill’s Harvard Egyptology Series, was published in September 2016. She is involved in the ongoing investigation of Kom el-Nana at Tell el-Amarna in Egypt, the site of a sun temple associated with Queen Nefertiti, which is the subject of her first book. She has been a member of several archaeological missions in Egypt and has worked in many museums including the Egyptian Museum in Cairo and the Harvard Semitic Museum, and has held teaching and research positions at UC Berkeley, Harvard University, and Brandeis University. Dr. Williamson teaches classes on the art and archaeology of the Ancient Mediterranean World.

For more about this lecture, read Dr. Williamson’s guest post on our blog, Shakespeare and Beyond.