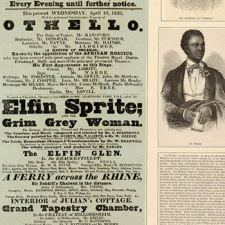 Free Folger Friday: The Elfin Sprite, one of the Talks and Screenings at the Folger, was held in the Elizabethan Theatre on Friday, May 6, 2016 at 6:00pm.

This staged reading of a 19th century fairy tale, The Elfin Sprite and The Grim Grey Woman was inspired by a playbill in the America's Shakespeare exhibition announcing actor Ira Aldridge’s first appearance in Othello. To follow Shakespeare’s epic tragedy, the 1883 program advertises a performance of a new “serio-comic legendary fairy tale” called The Elfin Sprite.

According to the playbill in the exhibition, The Elfin Sprite “was received on its 2d representation with roars of laughter and applause” and will therefore “be repeated every evening until further notice.” It tells the story of the wicked Sir Joddril of Hilldersheim and his love for the virtuous Lady Blanch of Rowsenwould who is herself in love with the brave but poor Julian. When a comic duo of magical creatures try to set things straight, who knows what will happen? (Hint: it involves a magical Elfin Bridge, a hidden forest labyrinth, and document forgery.)

The curator of America's Shakespeare, Georgianna Ziegler, introduced the evening and actor Todd Scofield brought this fairytale to life.