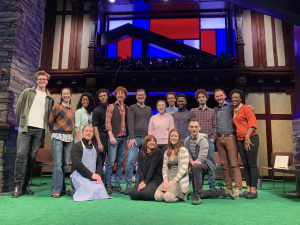 The cast and playwright.

Free Folger Friday: The Bardy Bunch by Stephen Garvey, one of the Talks and Screenings at the Folger, was held in the Elizabethan Theatre on Friday, January 24, 2020 at 6:00pm.

As a companion to The Merry Wives of Windsor, the Folger produced a free staged reading The Bardy Bunch, a musical comedy by Stephen Garvey. In the summer of 1974, the Brady Bunch and Partridge Family—recently canceled by ABC and no longer under America's watchful eye—meet in a blood-soaked, passion-filled, very special episode of Shakespearean proportions. The reading was directed by Jennifer J. Hopkins. Stage directions were read by Ben Falacci.