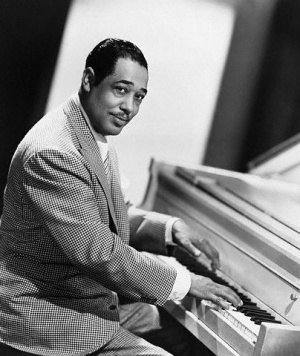 Free Folger Friday: The Bard & The Duke, one of the Talks and Screenings at the Folger, was held in the Folger Theatre on Friday, Jun 9, 2017 at 6:00pm.

Maurice Jackson of Georgetown University delves into Duke Ellington’s album Timon of Athens: Incidental Music for Shakespeare’s Play. Come to hear and discuss this jazzy take on Shakespeare’s tale of fortune and friendship.

Professor Maurice Jackson, Ph.D., teaches history, African American Studies, and Jazz at Georgetown University. Among the former longshoreman and community organizer’s many accomplishments are Let This Voice Be Heard: Anthony Benezet, Father of Atlantic Abolitionism (2009, author), African-Americans and the Haitian Revolution (2010, co-editor), and Quakers and Their Allies in the Abolitionist Cause, 1754-1808 (2015, co-editor). Halfway to Freedom: African Americans and the Struggle for Social Progress in Washington, D.C. is in the works. Professor Jackson has also published numerous articles, including, in the journal Washington History, “Washington, D.C.: From the Founding of a Slaveholding Capital to a Center of Abolitionism” (2013) and “Great Black Music and the Desegregation of Washington, D.C.,” the latter for a special issue on Jazz in D.C. for which he served as co-editor (2014). Professor Jackson was a 2009 inductee into the Washington, D.C. Hall of Fame, and Mayor Vincent Gray appointed him as the first chair of the D.C. Commission on African American Affairs in 2013.