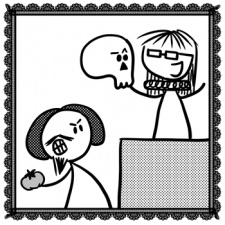 Free Folger Friday: Shakespeare and Comics, one of the Talks and Screenings at the Folger, was held in the Elizabethan Theatre on Friday, April 29, 2016 at 6:00pm.

Cartoonist Mya Gosling led a presentation about her popular webcomic Good Tickle Brain that shines a spotlight on the silly side of Shakespeare - from three-panel summaries of entire plays, to death tally infographics, to scenes re-enacted by Star Wars action figures.

Audiences learned about the process of creating a webcomic and helped as Mya drew an original Shakespeare comic live on stage.

Print copies of Good Tickle Brain comics and other merchandise were available for purchase and signing at the event.