Free Folger Friday: Shakespeare's Kitchen, one of the Talks and Screenings at the Folger, was held at the The Haskell Center for Education and Public Programs on Friday, December 4, 2015 at 6:00pm. 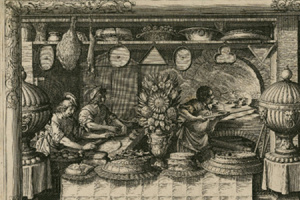 How and what did people cook at home in the age of Shakespeare? And how can we make those recipes in our own kitchens today? At this event, Alyssa Connell and Marissa Nicosia, authors of the historical cooking website Cooking in the Archives, discussed finding, updating, and cooking early modern recipes. 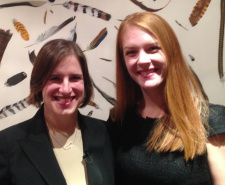 Alyssa Connell holds a PhD in English from the University of Pennsylvania. She studies British literature of the long eighteenth century (1660-1800), specializing in travel writing, book history, cartography, and epistolary fiction. She has taught classes on periodical culture, Jane Austen, eighteenth-century travel narratives, British Romanticism, and nineteenth-century fugitive stories, as well as a monthly community literature seminar in Philadelphia. With Marissa Nicosia, she is the co-founder of Cooking in the Archives: Updating Early Modern Recipes (1600-1800) in a Modern Kitchen, a public history digital humanities project that curates transcribed and updated recipes from early modern English household manuscripts for an audience of food historians and culinary enthusiasts alike.

Marissa Nicosia is an Assistant Professor of English at Penn State Abington where she teaches, researches, and writes about early modern English literature, book history, and political theory. She holds a PhD in English from the University of Pennsylvania and previously taught at Scripps College. Marissa's current book project studies the history play in the seventeenth-century to argue that the genre forged speculative political futures. Her work has been supported by the Andrew W. Mellon- Rare Book School Fellowship in Critical Bibliography and the Folger Institute. With Alyssa Connell, she is the co-founder of Cooking in the Archives: Updating Early Modern Recipes (1600-1800) in a Modern Kitchen.