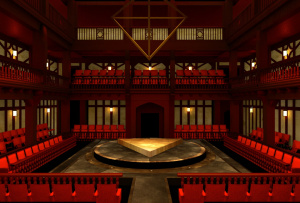 A set rendering for Antony and Cleopatra

Free Folger Friday: On Set with Tony Cisek, one of the Talks and Screenings at the Folger, was held in the Elizabethan Theatre on Friday, October 20, 2017 at 6:00pm.

In 2014, Folger Theatre charted new territory in the history of its Elizabethan Theatre by converting the traditionally proscenium space into an arena. This was the vision of director Robert Richmond and scenic designer Tony Cisek for Folger Theatre’s Richard III. The duo reunited in 2017 for Antony and Cleopatra, tackling the same feat of transforming the theatre space into an "in-the-round" configuration.

At this event, Tony Cisek discussed the design and installation of the playing space for our first production of the 2017/18 season.