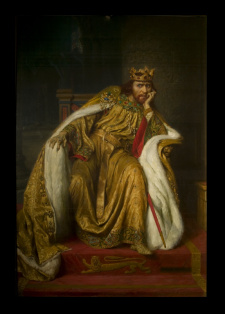 Free Folger Friday: King John On Stage and Screen, one of the Talks and Screenings at the Folger, was held in the Elizabethan Theatre on Friday, November 30, 2018 at 6:00pm.

At this event, Dr. Michael Anderegg discussed the history of King John on screen, the first Shakespeare play to ever be recorded on film. This talk was presented alongside the Folger Theatre production of King John

Michael Anderegg is professor emeritus of English at the University of North Dakota. His books include Orson Welles, Shakespeare, and Popular Culture (1999), Cinematic Shakespeare (2004), and Lincoln and Shakespeare (2015). He wrote an essay for the recent Criterion Blue-Ray release of Chimes at Midnight and was interviewed for the forthcoming Olive Films Blue-Ray of Macbeth.