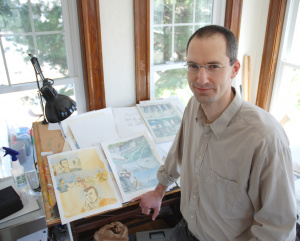 Free Folger Friday: Shakespeare and Comics, one of the Talks and Screenings at the Folger, was held in the Elizabethan Theatre on Friday, April 29, 2016 at 6:00pm.

Author and illustrator Gareth Hinds takes literary classics such as Beowulf and The Odyssey and translates the tales into colorful and spellbinding graphic novels. Of Shakespeare’s plays, he has illustrated four: Macbeth, Romeo and Juliet, The Merchant of Venice, and King Lear. At this event, Gareth discussed his artistic process, working with classical source material, and just what it’s like to illustrate the words of the William Shakespeare.

Gareth Hinds is the creator of critically-acclaimed graphic novels based on literary classics, including Beowulf (which Publisher’s Weekly called a “mixed-media gem”), King Lear (which Booklist named one of the top 10 graphic novels for teens), The Merchant of Venice (which Kirkus called “the standard that all others will strive to meet” for Shakespeare adaptation), The Odyssey (which garnered four starred reviews and a spot on ten "best of 2010" lists), Romeo and Juliet (which Kirkus called "spellbinding"), and Macbeth (which the New York Times called "stellar" and "a remarkably faithful rendering"). Gareth is a recipient of the Boston Public Library’s “Literary Lights for Children” award. His books can be found in bookstores and English classrooms across the country, and his illustrations have appeared in such diverse venues as the Society of Illustrators, the New York Historical Society, and over a dozen published video games.

Explore Gareth’s books and more of his work on his website.