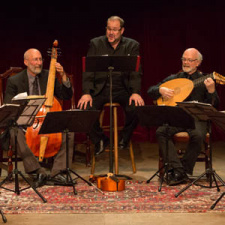 Free Folger Friday: Early Music 101, one of the Talks and Screenings at the Folger, was held in the Elizabethan Theatre on Friday, September 21, 2018 at 6:00pm.

Folger Consort musicians Dan Meyers and Webb Wiggins gave a whirlwind introduction to the instruments and musical styles of Renaissance and Baroque Europe, and a glimpse into how 21st-century musicians approach the music of earlier eras.

Folger Theatre’s production of Davenant's Macbeth featured music by John Eccles and other composers. The musicians in the show took a special approach to presenting this music that's often called "historically informed performance", drawing on their knowledge of the instruments and musical styles that were popular in Restoration England in order to help immerse the audience in the world of Davenant's play. But what does "historically-informed performance" really mean, and why is it about more than just playing old instruments?