Free Folger Friday: Crime Writers on Shakespeare, one of the Talks and Screenings at the Folger, was held in the Folger Theatre on Friday, February 5, 2016 at 6:00pm. 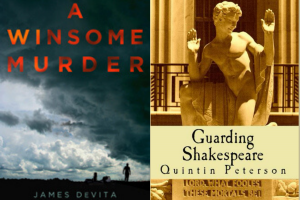 At this event, authors James DeVita and Quintin Peterson discussed their Shakespeare-inspired novels A Winsome Murder and Guarding Shakespeare.

In A Winsome Murder, a grisly crime in a pastoral Wisconsin town, Winsome Bay, proves to be only the opening act in a twisting, darkening series of gruesome deaths. In this fast-paced novel we meet a gorgeous waitress with a haunted past, an author juggling a failing career and motherhood, and a hard-bitten detective with unexpected inspiration from William Shakespeare’s bloodiest plays.

In Guarding Shakespeare, Special Police Officer Lt. Norman Blalock has been guarding the Folger Shakespeare Library’s priceless collection for 25 years. Nobody alive knows the library better. That's why he is the perfect candidate to pull off an inside job and heist from the library's underground bank vault a priceless artifact that can rock the foundation of English Literature.

Copies of both books were available for purchase and signing at the event.

James DeVita is a theater artist and writer based in Wisconsin. He is the author of the novels, A Winsome Murder, The Silenced and Blue, as well as an award-winning playwright of works for both children and adults. He is a core company member and the literary manager at American Players Theater and has performed a number of Shakespearean roles in his twenty-year career as a professional actor including Romeo, Benedick, Pericles, Leontes, Iago, Richard III, Macbeth, and Hamlet. A recipient of the National Endowment for the Arts Literature Fellowship for Fiction, he was also a volunteer EMT in Wisconsin for fifteen years and the first mate on a fishing boat in Long Island for five seasons. jamesdevita.com

Quintin Peterson is an author and retired District of Columbia police officer with over 28 years of service. A native Washingtonian, he received fellowships from the National Endowment for the Arts and the DC Commission on the Arts and Humanities for his undergraduate playwriting work. As a police officer, his duties included assignment to the Office of Public Information as a media liaison officer and also as the motion picture and television liaison officer, acting on behalf of the police department as script consultant/technical adviser. His award-winning works include a book of poetry, two novels and a novella, as well as contributions to numerous crime fiction/noir anthologies. He has worked as a Special Police Officer at the Folger Shakespeare Library since 2010. His work is available for purchase on Amazon.